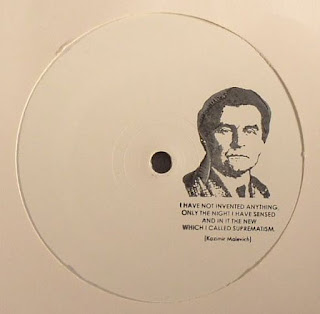 Truth be told and as we mentioned in our previous post - we've got a love/hate relationship with Vakula. It's not that we don't like his stuff, it's just that it's a bit too weird and too much on the experimental tip for us. Don't get us wrong though, we still love many of his productions just for that reason - because they're so strange and so far off the beaten path. The man's got a knack for blending obscure movie dialogue in and out of choppy, minimal, stuttering house beats; and morphing other random sine-waves and modular synth patterns every whichway from friday in a way that renders many of his tracks almost un-danceable, but often still very good I might add. The originality of his productions always sets him well apart from the rest however. His recent project - Leleka showcases this originality not only in the music but also from an aesthetic POV, with some of the most beautifully coloured/marbled black & white pressings. I instantly bought the first two and love them, even if the audio might potentially give my 2 year-old nightmares.

Once in a while though Vakula comes out with a slow n' chuggy bomb that's not too spaztic and has got just the right amount of sleaze for us. At the moment that particular track is his new release on Shevchenko entitled 'Asuwant' that's got our pickles tickled. And in particular, the title cut is the only one on offer that we're into (there's actually 2 versions of this track on the A side). Coming in nice and slow, extra dubbed-out to great effect and without too many noisy elements that make your ears bleed. On the contrary, the fizzling but thumping kick, reverbed live piano stabs, killer vocal by unknown vocalist 'Dices' - not to mention one of the warmest basslines out there atm...all offer heavy headnodding material and rides the perfect line of perfect deep and dreamy warmup material for us. A seriously great track. Side two is just drum machine insanity - too strange for our taste, we can't listen to the whole thing till the end without getting dizzy.

Pressed up on clear vinyl, limited pressing - get in on the action HERE

From its wine to the fries and, of course, the kisses; there’s plenty to love about the home country of les Bleus and the Eiffel Tower. But what we’ve been digging most of all, is the steady influx of topnotch producers coming out of la douce France lately.Co-founder of the Moonrise Hill Material imprint alongside Folamour, Ethyène and Kaffe Crème, Lyon-native Saint Paul is a sample-wielding wizard with a particular taste for all things Jazz. With a style equally suited for a lazy listen or some serious strutting, his previous releases have seen him adding to the catalogues of both MHM and Better Listen before landing on Salin Records for their final outing of 2018. Marking the first solo EP of an external artist on Christophe and Daria Salin’s brainchild, ‘A Jazz Delirium’ sits snugly between both Saint Paul’s and the imprint’s previous productions, featuring the kind of classy cuts that can be enjoyed from daybreak until the morning after.  Have a taste of the title track, wi…