Out in the Sticks - Forget me nots (Disco Deviance) 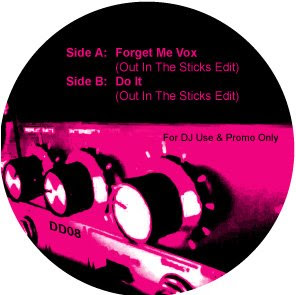 Finally this sees the light of day on plastic. Australian outfit Out in the Sticks (OITS) have been causing quite a stir in disco/re-edit obsessed circles. A few weeks ago I was lucky enought to pick up the 6th OOFT-Forever in their Debt CD release from Phonica, which features a beast of a track by OITS called 'In the dark'.

This seems to be their freshman solo release on the ever solid Disco Deviance. Up on offer is a superb rework of Patrice Rushen's Forget me Nots, extended and reshuffled into a perfect DJ tool. On the flip we have a track called 'Do it', which is actually my pick of the two. Lovely midtempo boogiefied disco that screams "PLAY ME ON A SUNNY SUNDAYAFTERNOON". Which is exactly what I'm going to do once I get my grubby mits on a copy. Ace.