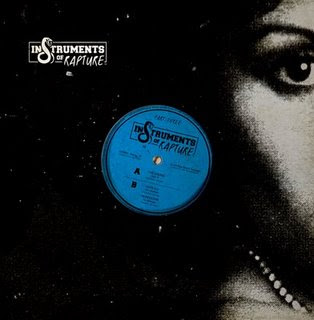 In a few week's time Instruments of Rapture will release their third record. This vinyl-only imprint, run by Graeme Clark, features the most sublime midtempo disco edits going 'round.
So far IOR have released their own material, either by Clark alone under the moniker The Revenge, or paired up with Craig Smith as The 6th Borough Project. IOR003 adds Ali Herron to the mix, releasing music with Clark under the name OOFT. Be sure, if you have not already done so, to frequently check out the OOFT blog for all sorts of up-front disco edit goodness.
The first cut on this three-track 12" is OOFT's "This Sound". It is a slow-burning wonder...I listen to this and I forget my own name. I could sit here and tell you all about its hypnotizing groove and buried vocal that repeats the title of the track, but would that really do it justice? Better to just point you to the OOFT MySpace page where you can check out the track for yourself on their music player.
The remaining two tracks on the EP are by The Revenge. "Hotz 4 U" is a nice little number with floating vocal snippits and a funky bassline. There's some subtle synth work bubbling underneath the trackier parts of the tune that bring to mind his previous "Night Flight" edit on Jisco (another favorite), and for me this tune would fit in at about the same place during a DJ set.
The last cut, "Heavy Love Affair", is an edit of the 1981 Marvin Gaye song of the same name. If you are not familiar with it, seek it out! Below in the player we offer you a sneak-preview of The Revenge edit.
Soul Clap, Tim Sweeney, Jimpster, Quarion, Nik Weston, Red Rack'em, Raoul Belmans, Dicky Trisco, Tal M. Klein and Super Value... what do all of these artists have in common? They are all charting tracks from Instruments of Rapture. Do not sleep on this record, slated for release July 22nd.
You can pre-order copies from Picadilly, or set up Juno to e-mail you when the release hits their shelves.
Instruments of Rapture IOR OOFT The Revenge