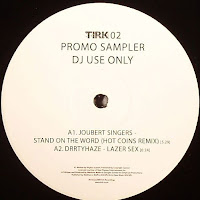 Any fan of the current mid-tempo disco movement is most likely familiar with the record label Tirk Recordings out of London. They have been putting out quality music with that electro-disco-funk edge since 2004. Back in March they released an amazing vinyl sampler of the label's second double-CD compilation. Let's take a look...
"Stand On The Word" is a gospel classic by the Joubert Singers, first recorded live in a NYC Baptist Church back in 1982. Fast-forward to 2009 and the classic gets reworked by Hot Coins (aka Danny Berman, a talented artist out of Nottingham). Hot Coins really dubs this one out with a stunning synthesized bassline that stabs and morphs throughout, waiting until the track is nearly finished to finally release the heavenly Singers from their hiding place. The result is a religious experience in more ways than one.
Next up is Drrtyhaze, the NY production duo of Douglas Gomez and Matthew Moffre. They have had a few releases on the label Gomma as well as Tirk. Most notably for me was their "Superhigh" tune from December '08. On this sampler they offer up a spacey track called "Lazer Sex", with smooth electronic instruments and a robotic bassline that I can only describe as the sound of lasers penetrating your body. This is sure to hypnotize the crowd and keep things moving.
Flip over the sampler to find a remix of the classic "I Feel Your Love Comin' On" by Chic. Morten Sorenson did a version of this last year which he called "Start Something". Here we find an updated remix from the 40 Thieves, a group of artists based out of California. 40 Thieves give this song the west-coast dub treatment by cutting up, stuttering and burying the well-known vocals under their own brand of electronic madness. What remains is an intense homage to the original with a contemporary twist that can't be denied.
Last but not least we have electronic music from the most unlikely of places... Siberia. The two Russians known together as Acos CoolKAs have released some great disco-infused tunes, such as last year's "Stellar Way". On this Tirk sampler they offer us an instrumental called "Free Flight". This is a slower, dreamy jam with soft pads and a subtle, underlying arpeggio that will quickly take you to your own happy place.
Both Phonica and Piccadilly still have some copies of the Tirk 02 Sampler in stock. Grab them while you can! Either way, you can check out the samples here.
40 Thieves Acos CoolKAs Drrtyhaze Hot Coins Tirk