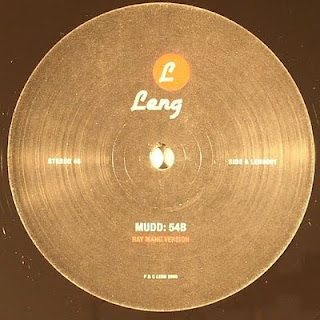 A really tasty treat has arrived just in time for the weekend. Newbie label Leng blasts off hard with a smashing cosmic disco chugger by Rong Music guru, Mudd. Together with shuffly space disco partners in crime Smith, Ben Cook, Tussle, Barfly, and Woolfy (among others) Mudd has produced some of the tastiest and dirtiest out-there space funk I've ever heard both on Rong and numerous other imprints like Claremont, Noid, Bear Funk etc.

This track actually came out in 2006 on Rong, with an original Mudd version and a Rune Lindbæk remix. Leng 001 - "54B" now has 3 more versions of the title track on offer, with none other than Sleazybeats fave Ray Mang churning out the 3 different remixes. Sigh. As is often the case, definitely hard to pick a fave again. The A-side is the original; a very strong track with mangled strings, soft pads and disco drums, perfect for low-slung nudisco sets. B1 gets down slightly edgier with a subtle acid version - really not too hard hitting, which makes things more playable for my taste. Finally, rounding things out on B2 are the bonus beats (and it is often the bonus beats of Ray Mang tracks that I find myself often playing). Hard to ignore those clean, empty, spaced-out house beats, complete with woodblock and cowbell hits. Delicious...

Grab it now and have a great weekend.

Here, have a listen to Ray's glorious 9 minute remix