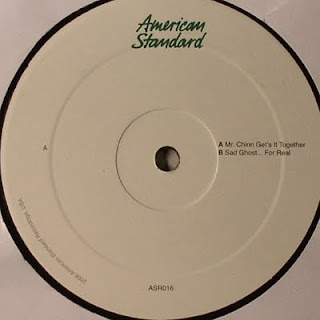 The fantastic US American Standard imprint was responsible for a debut record that came out in 2008 that still get tons of playtime by me, as both the A and B sides are incredibly groovy and infectiously melodic beasts. The record in question is ‘Medina’s Magic”, that contains two very special reworks by a certain magician dubbed Cole Medina. The A-side title track was featured on Cole’s mega-lush, sub-tempo Disk Union mix (it’s simply amazing, I actually can’t sleep unless I’ve listened to it at least once per day - we've linked to it before...check it here).

American Standard numero 2 is now on shelves (it’s been a couple of weeks now) at all fine retailers and serves up yet another spicy dish. This time there are two relatively obscure R&B/soul tracks that get funked up albeit in entirely different manners. Up first, Rong Music recording artist Mr. Chinn reworks an old unknown tune: ‘Let’s Get Together’ into a loopy vocal uptempo burner with live synths and lots of piano action that’s sure to be a hit under the disco ball. On the flip, “Sad Ghost…For Real” gets a tad more downtempo and sleazy, with none other than the mighty Chris Keys in the cockpit this time reworking the elusive classic, ‘For Real’. This one's a slow souled-out breakbeat with tasty vocals and strings that make this record a contender to recon with the likes of its predecessor. Chris actually threw an mp3 of this tune up on his excellent blog ‘Another Night On Earth’ a while ago, but admittedly mentions that the mastering on this here record works wonders for the tune. Aahhh, good old vinyl mastering, is there anything it can’t make sound deliciously fine? Grab this one from the usual haunts.
American Standard Chris Keys Cole Medina Mr Chinn