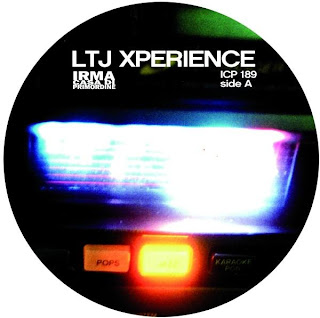 LTJ X-Perience (or Luca Trevisi to his mom) has been playing and making music for ages. While I was most likely listening to some dreadful grunge in highschool, LTJ dropped his first record on Irma in 1994. Over the years, LTJ has become a household name in downtempo, jazz, funk and bossa circles, crafting some fine rhythms and melodies that featured on more compilations than you can count on two pairs of hands.

His talents don't stop there though; our Italian friend also happens to be one of the best kept secrets of the slow motion house movement. His 2008 release 'Organ Mind', a superdeep and low-slung beatdown workout was a firm favorite of Larry Heard and found its way onto Mark E's seminal Resident Advisor mix. We've also been raving about his collaboration with Riccio on these pages (a superb EP on their new label Hidden History Recordings).

We're happy to report LTJ is about to release a new 12" on Irma, offering two sublime hypnothic beatdown cuts: 'Sound Machine' and 'On The Floor'. Sound Machine, clocking in at a whoppin' 92 BPM is a chuggy, loopy beast that just won't let go, while On The Floor takes a trip down slow-paced disco-lane to great effect. Fans of Mark E and the Super Value Special Edits series will love this. Irresistable stuff that deserves a prime spot in your record box.

Keep 'em peeled, the record is out soon in all decent record shops.