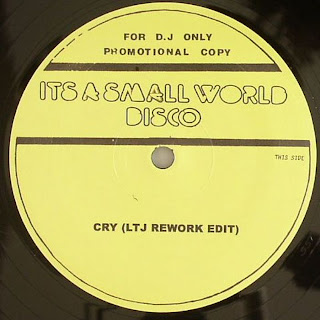 There's simply no stopping Italian beatdown disco don Luca Trevisi at the moment. Over the past weeks, we've seen a majestic release on Irma under his LTJ X-Perience guise (which we covered a while ago), another sterling installment of the Super Value Special Edits Series and a compilation/mix cd of old and forgotton soul bombs. As if that wasn't enough, we're being treated to two new tracks on new imprint 'It's a Small World Disco'. Slap your needle down on the A for some prime headnodding material, a chuggin, relentless midtempo workout with some ace Marvin Gaye samples. The B is a sweet instrumental groover with lush jazzy keys and some clever drums and is my pick of the two. An irrestistable record then, further cementing LTJ's reputation as one of the most exciting names in slowmotion/re-edit circles.