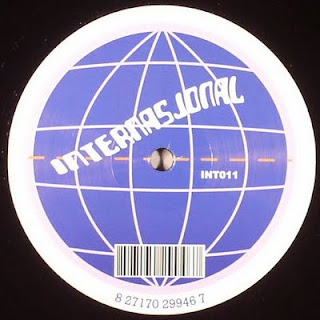 Hot on the heels of Hunee's incredible Brother release not even two months ago, Prins Thomas' ace Internasjonal stamp releases another great record by none other than a Sleazy fave, The Mole, aka Mole of Soul, aka Colin de la Plante (to his mom) and Guilty Pleasures, entitled 'Family'. This is his second output on Internasjonal and he doesn't disappoint. If you're not familiar, The Mole always takes his own slant on whatever he produces, from techno to nudisco, funk to house, you can always expect the bar to be set high, but always expect the unexpected and for barriers to be pushed. His last release on the amazing disco edit label 7 Inches of Love (his imprint along with partner in crime Koosh) was incredible, as is this one - albeit little different.

The title track 'Family' gives us a moody disco-fied burner with strings and keys that tickle just where they should. Not your typical disco beat mind, making this one quite versatile to toss into a number of different sounding dj sets I think, that should work well on quirky dancefloors. The flip track gets the tempo slider kicked down into Mole territory (approx 112 bpm) with 'Rotation', which is probably my pick of the two. This one has delicious organ stabs that echo and fade alongside a shuffled, broken house beat that chugs along perfectly. This one had me nodding my head quicker than I could say Oslo.

Have a listen and grab this impecable record here. Oh, and don't pass up a chance on catching an El Molito dj set if you can, he tends to literally tear venues apart with his superhuman mixing skills and extreme prowess on the knobs and buttons.
Guilty Pleasures Internasjonal The Mole