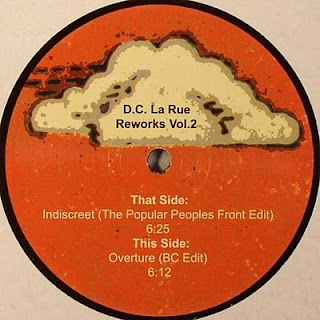 Nifty package on deck here from the crew that's made a point to add some magic to many of the tracks by the massively successful disco icon DC La Rue, the don that originally brought us the now heavily sampled 'Cathedrals' in the late 70's.

Two hot cuts on this second installation by London's DC La Rue Reworks imprint that'll funk your socks off. The first track, 'Indescreet' offers a masterful rerub by the Popular People's Front that is a bit different from their usual fare, getting down with a heavy vocal by DC and his girls that soon leads into a heavy organ-fueled instrumental whirlwind.

On the flipside, and my pick of the two is 'Overture' - with BC at the helm. This one chugs along charged by a midrange acid bassline, overtop a disco-fied funk guitar, and a sweeter than sweet brass section. Another one that fans of the DD and Cosmic Boogie releases etc should feel right at home with in their pocket. Some seriously funky ammo here, we like!

Stop by and grab this killer record here at Juno before it sells out and disappears into oblivion...and if you haven't heard it yet - listen to the marvel that is DC La Rue's 'Cathedrals' below.