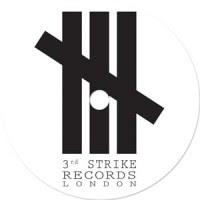 Right, so I have no idea what the hell an Erdbeerschnitzel is (strawberry steak?) but who cares if it sounds so DAMN TASTY. By now you must have heard that Jisco/Under The Shade head honcho Dave Griffiths is expanding his empire of the deep with yet another label, 3rd Strike Recordings, "focussing mainly on house music" according to the press release. Well we all know house music comes in many shapes and forms, of which I detest about 85% so I was anxious to hear the first release. To be brutally honest, I was a bit sceptical too, because - given a few notable exceptions - most of the Under The Shade catalogue doesn't really do it for me.

Happy to report that Erdbeerschnitzel's EP on 3rd Stike is an outright beast of a record with just the right amount of sleaze/filth. Tim Keiling, the man behind the odd name, delivers two squelchy, superdeep midtempo bombs with skippy, wonky drums, vintage-sounding detroity synths, loopy vocal snips, sloppy claps, the works. Quite hard to describe really, it's a most refreshing sound that bridges the gap between Detroit house and filthy techno, pitched down to around 110 BPM. In short, both '4 Months' and 'Tonight is Today is Tomorrow' are mint. Oh, and before I forget, there's a pair of remixes too - 4 Months gets a Mark E workover that works a treat and Arto Mwambe sprinkles some magic tech-house dust over 'Tonight is Today is Tomorrow'. Both are not a patch on the original tracks though. Tight stuff, can't wait to play this out.