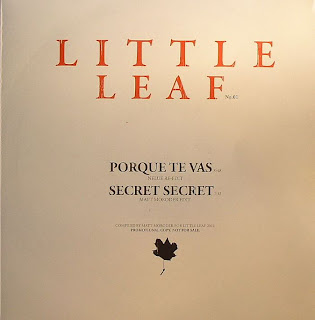 Massive tune on the B side of this first outing of new German label Little Leaf by Glossy Edits' Matt Moroder. According to the release notes it is a rework of a big 70s tune, though I have to admit I have no idea what the source material is. The basic idea of 'Secret Secret' is actually rather simple. Loopy, heavy, messy drums (think Mark E in his Jisco years), chunky percussion that really gets you in headnod mode and some gritty guitar licks make it a most hypnothising ride. After a a few minutes a vocal loop makes its entrance and things get a bit psychedelic with spacy synth lines and trippy keys. Simple, maybe, but incredibly effective and engaging. I'm sure this will work a treat when played at the right moment.

Comes in a really nice screen printed sleeve and is a vinyl only affair. Oh yeah, before I forget, the A side of the record is an edit of a latin disco number by Nelue that isn't half bad either, but it simply is no match for the sheer awesomeness of Secret Secret. Run out and buy, these will be gone before you know it. One of the heaviest tracks I've heard this year. Tidy.