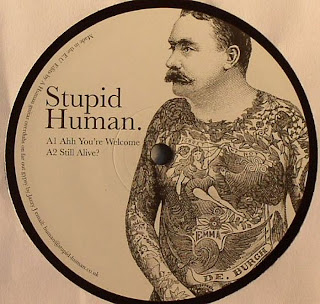 Swamp Funk, Stupid Human's debut release that came out a few months ago was an instant hit in the disco/re-edit scene, and rightfully so - if you missed it make sure to drop whatever it is you're doing and run out to your nearest recordstore, Swamp Funk is a ridiculously infectious rework of an obscure vocal track with dirty claps, oodles of oomph and a fair bit of southern grit.

Happy to see the next episode in the Stupid Human saga rear its lovely head, featuring four new rerubs. Things start off rather nicely with Ahh You're Welcome, a dubby take on Rufus and Chaka Khan's Stop On By with a juicy kick and a steady groove. Leo Zero did an edit of the same track for the Popular People's Front Limited Series. That record is A: rare as hen's teeth and B: way too short, so I'm happy as can be "l'Homme Stupide" decided to give it a sonic makeover. Still Alive, also on the A is a skit of a choir chanting something about being alive. I'm sure it could work as an end of set type track but I'm not the greatest fan of skits and tings on 12" (advice for all label owners, leave out the interludes, bonus beats and acapellas and press tracks on 45 rpm).

On the B side, Far Out Gypsy follows the same pattern as Swamp Funk: a lush midtempo southern sounding/harmonica track with a truckload of bottom end and a badass groove, simply irresistable. A straight Head rounds off the EP nicely with its 80s sounding swirly filters, synths and androgynous vocals. Superclassy package, and the center sticker is another true piece of art, very fresh.

Have a listen to Ahh You're welcome here: