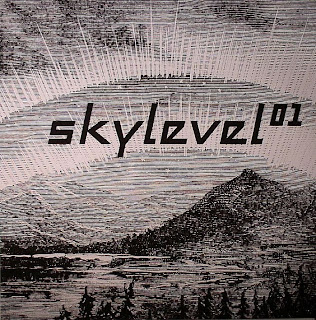 We get sent a lot of stuff these days (and a lot of dross to be honest), but we don't get sent many actual "records". You can imagine how excited we got when the postman stopped by at Sleazy HQ to drop off a promotional copy of ´Skylevel01´, a new project from a well-known and well respected Berlin based producer (that´s all we can say about who´s behind this though, we´re sworn to secrecy). We can, however, assure you this is an absolute pearl of a record, which features two bassheavy, chunky midtempo reworks of obscure funk tracks.

Things start off with ´55 steps´, a chunky groover with what has to be the filthiest slap bass I´ve heard this year. Picadilly Records aptly described it as "a concentrated, bassline groove that just keeps piling on the dancefloor pressure a la Paperclip People "Throw". The track moves from part to part smoothly, playing with a certain rock attitude while holding back a few surprises along the way".

Things get even better on the flip with the badass ´Six Million Steps´, a slightly deeper workout with a driving bassline and chunky percussion that sucks you in and won´t let go. I´ve played this for some of my "oh my god edits are killing house music" friends and they all go apeshit over this one.

The record first popped up over at Hardwax in Berlin, but got picked up by a distro for a proper release. Superlimited pressing of 200 copies with proper artwork on the sleeve, best whip out the ol´ credit card if you want to own one of the coolest records of 2010. Picadilly picked it as their Record of the Week, Phonica stuck it up on their frontpage as an essential release. Don´t miss out!