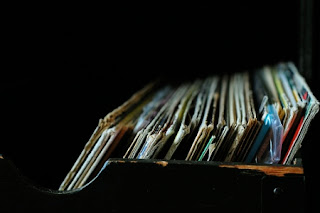 Let's face it, 2010 has been a rather fantastic year. Yes, the oil disaster in the Gulf of Mexico was horrible, kids getting trampled to death at Germany's Love Parade a horror scenario and to top it all off, those Take That wankers got back together. The miners in Chile survived though, Obama managed to hook up every American with health insurance (welcome to the developed world, American brothers and sisters!), babies were born, Soundcloud took over the world, disco dragonpunched minimal techno and the exploding edit scene kept vinyl alive pretty much by itself. For us over at Sleazy Beats, 2010 was pretty special too, with our first 5 releases all selling out in record time. Eddie C's Rocket Science EP is going for over 60 Euros on Discogs these days, Tornado Wallace's record is simply impossible to find and some of our favorite DJs have been rinsing SE62 and Daniel Solar's tracks for months. We've bought some incredible music these past twelve months and tried to cover as much of it as possible on these here pages. Since everyone and their mum are doing end of year lists, we figured we might as well follow suit and put together a list of our favorite producers, tracks, mixes and records to have surfaced over the past twelve months ("everyone else is doing it, so why can't we?"). Thanks so much for reading our ramblings and buying our singles, loads of love from Copenhagen, Amsterdam and Boston and see you next year!

Easily this year's best 12" on one of our favorite imprints around. Four killer midtempo deephouse tracks by Session Victim, Francis Inferno Orchestra, Greymatter and Dead Rose Music Company. One of Juno's bestselling records this year, and deservedly so. Would have signed these tracks for Sleazy Beats with our eyes closed. Awesome!

We picked Erbeerschnitzel's To An End as our track of the year, but we could easily have chosen one of the other tracks Tim Keiling unleashed in 2010. To an End, Suave, 4 Months, Tonight is Today is Tomorrow, all these tracks were a breath of fresh air. Proper forward thinking deep electronic soul that will stand the test of time. Can't wait to hear what he's been cooking up for 2011.

Edit of the year
TBD Extension - Get to my Baby (Golf Channel)
runner up: Eddie C - Hold on (7inches of love)
Honourable mention: William DeVaughn – Be Thankful for What You Got (Onur Engin Edit on Square)

Golf Channel has been a consistently proper label for all kinds of quirky beatdown deepness this past year, but this one edit Try To Find Me dropped mid-way through 2010 of TBD Extension's Get To My Baby blew our minds, and surprisingly not in a beatdown sense. Nearly impossible to mix with it's unquantized drums, but once it's on there's no going back. Limited edition, single sided, etched business that makes you proud to be a vinyl collector.


Producer of the year:
Eddie C
runner up: Erdbeerschnitzel
honourable mention: Nicholas
We simply can't say enough about Eddie C, seems he has something to do with almost every third record or so we cover on these pages...but hey, where would we be without him? He broke our cherry as a label, appearing on our very first record and that's something pretty darn special we think. Since then he's done umpteen other releases on labels like Kolour LTD, Seven Inches of Love, Endless Flight and Wolf Music (including a massive tune on SBR004 that sold out in a blink) so in these respects we think there's no contest, Eddie wins hands down.

Label of the year:
Delusions of Grandeur
runner up: Wolf Music
honourable mention: Kolour LTD
Jimpster's Delusions of Grandeur imprint was simply unstoppable in 2010. Two stunning records by Tornado Wallace, two equally badass releases by Session Victim, a fantastic twelve introducing the considerable talents of Franc Spangler (how massive was that Open Eyes track?) and more clusterbombs by Manuel Tur and Trickski. The geezers over at DOG sure have an ear for timeless moody midtempo deepness, are not afraid to sign new names and have the balls to keep pushing vinyl. Awesome label, awesome music.

If there's one imprint we've bought more from than any other this past year it's definitely Super Value Edits. Spearheaded by Luca 'LTJ' Trevisi and Riccio out of Bologna, the tracks they put out easily live up to the label's name. The Super Value crew reworked a shitload of old disco, funk and soul into dirty, lowslung beatdown chuggy beasts with heavy drums. We've been fans since the first Super Value release (back when we had no idea who was behind these bits) and have been in constant awe of the quality control and consistency of the label (and its sister imprints No More Hits and Small World Disco Edits). Great to see these guys getting the recognition they deserve, they really are working their balls off.


Berlin's Dikso took the midtempo deephouse/edit scene by storm this year. Three vinyl releases (all of which were contenders for the 'record of the year' category) featuring the talents of label owner Daniel Solar alongside Francis Inferno Orchestra, Nicholas, James Johnston, Matthew Kyle, Andy Hart and a host of other up and coming producers. These guys know a thing or two about how to put out a record too, as their profile has been skyrocketing since the first release popped up on the shelves. Destined to be even bigger in 2011!

Yeah so Toby Tobias dusted off his Tracky Bottoms imprint and did a pearl of a record (which we covered a while ago). A most versatile piece of wax incorporating deephouse, disco and filthy wobbly boogie. Presto: one of our biggest secret weapons this year. Deadly stuff, really hope mr. Tobias will treat us to at least one release in 2011.


Blog of the year:
Another Night on Earth - Chris Keys has been keeping things tidy for yet another year over at ANOE, our favorite hangout on the net by far (with the best guest-mix series around).
runner up: Disco Delicious
honourable mention: Ooft

That's it folks, thanks for all the support and see you in 2011, the year that Boogie will kick disco's ass, Benjamin Sun and the Voyeurhythm imprint will finally get the recognition they deserve, Dead Rose Music Company will sell a shitload of records, 6th Borough Project will finally release their LP and another 5 Sleazy Beats records will see the light of day.