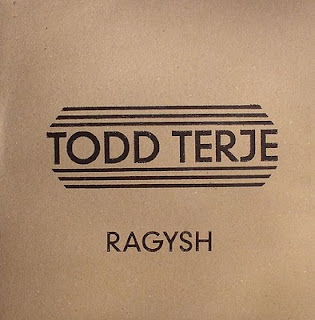 Just a quick note to let you know about something a tad different but still a record we're pretty excited about this week, which is the fantastic new Running Back 12" entitled 'Ragysh' by our favourite Norwegian, The Terjenator aka Todd Terje Olsen to his mom. This guy don't come out with too many of these here eps, so when a new slab comes along by him it's always good to snap it up quick. We've been huge fans forever of many of his edits, some of them are simply a few of the best produced re-rubs of all time. This record contains possibly an even bigger surprise however, as you'll find 3 of the man's original productions...which is something you really don't see too often. Rumour has it that just last week in fact - this record apparently sold out at a record shop in Oslo one afternoon which soon resulted in people literally brawling in the streets. Luckily a truck soon arrived with a new shipment and a full scale meltdown was narrowly averted. Close call.

Although this slab is billed as containing 4 tunes there's also some hidden cuts to be found - a nice bonus. The excitement comes in the form of 3 rocking tracks though: Ragysh, Bonysh and Snooze 4 Love that all roll with a little slightly higher tempo of roughly 120 (hey, let's face it - that's fast for us) and each of which is totally special and unique in its own way; just have a listen below and see if you dig as well. It's definitely the quality we've come to expect from the combo of Mr.Terje and such a great label like Running Back.

Snap it up quickly, this one won't hang around long as it's a limited press 12" - so get some love HERE while you're still able.
Ragysh Running Back Todd Terje