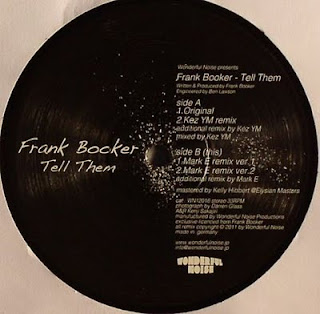 I just got home from my local shop (Rush Hour), armed with two new Frank Booker releases on Japanese imprint Wonderful Noise. I'm well aware of the fact that these days, record shopping is a bit of a privilege for most people. There's only a few decent actual record stores left that stock 12" vinyl and if you're on tight budget, lifting a few cheap downloads from the internet is a far more attractive proposition than ponying up a tenner for just one record. But let's face it, nothing beats bagging a few gems and rushing home to play them though now does it? And oh boy, we're dealing with pure gems here.

El Salvador is a classy midtempo moody beatdown disco workout with some cheeky samplin' thrown in for good measure. If you liked mr. Booker's releases on Untracked you'll love this one too, it's got the same raw swing and drive that made those releases so special. I'm in love with the original but I want to make love to Cosmic Boogie's extended, spaced out remix on the B, it's one of the best things I've heard this year. Absolutely essential. 'Tell Them' on the other 12" follows the same recipe: chuggy beats, driving claps and hats and a dash of clever sampling: presto, another pearl of a tune. Kez YM turns in a tasty moody remix on the A, while Mark E is on remix duties on the flip, though in my humble opinion Mark's dubbed out rerubs are not a patch on the original track (the B-side of the record is cut really quietly too, which doesn't really help). I'm sure I'll kick myself in the face for writing this in a few months though when I discover that both remixes are masterpieces that grow on you, as usually is the case when we're dealing with Mr. Everett.

Fantastic pair of records this, well worth shelling out the money for (there's always Ramen noodles, right?). Superlimited (only 300 copies worldwide) and most likely worth tenfold the asking price in a month or three, so make sure to head to your local and pick this up pronto. For some reason Juno's asking silly money for these, so if you have to resort to mailorder, head over to Rush Hour.
Frank Booker Wonderful Noise