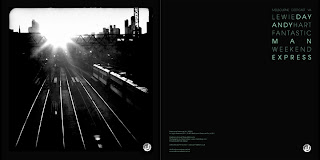 I was having a chat with one of the guys from Kolour Recordings last week and we quickly reached the conclusion we should pack up and move both our labels to Melbourne, which is where all the action seems to be coming from this year.
Tornado Wallace, Francis Inferno Orchestra, Fantastic Man, Andy Hart, Weekend Express and a host of other talented DJs and producers are all based in what I've been told is easily Australia's most easygoing and culturally sophisticated city. This crew´s reign over the midtempo deephouse realm started last year and seems to be getting stronger by the day. Fantastic Man has a hugely anticipated record coming out on Kolour LTD, Tornado Wallace will soon be unleashing an EP on Instruments of Rapture and releasing another record for Delusions of Grandeur, Francis Inferno has tracks coming out on a whole bunch of different labels, and Weekend Express are topping Juno´s sales charts at the moment with a blinding record on Still Music´s Stilove4music offshoot. While all these guys are individually carving out their own little spots of stardom, there´s one thing that binds them: the Melbourne Deepcast, run by Andy Hart and Myles Mac.

What started as a series of (some really incredible) guestmixes slowly evolved into a full-grown musical platform with very well written music reviews, interviews, label profiles and whatnot alongside the podcasts. The Deepcast boys are about to take things one step further with the launch of their own imprint, Melbourne Deepcast Recordings. Unsurprisingly, their maiden voyage is truly spectacular, showcasing once more how goddamn' good this special branch of midtempo deephouse is. These guys all have the gift to perfectly combine warmth and depth with loads of oomph and their tracks are really well-produced. Don't take my word for it though, have a listen here:

Expect to hear more from these gents soon (MD002 is insanely good too, we heard some sneak previews of it a few weeks ago, going to be huge)

Pick up a copy over at Juno or any of the other usual haunts. The artwork is amazing, building on the same photography that makes the Melbourne Deepcast website look so classy. Highly recommended and hats off to Andy and Myles for starting things off in style.
Andy Hart Francis Inferno Orchestra Melbourne Deepcast Mic Newman Tornado Wallace