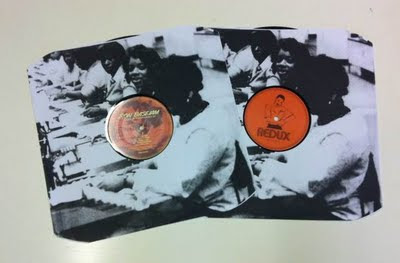 Got a big batch of new records in yesterday, but so far I haven't been able to stop listening to 'Get Closer', one of the tracks of Ron Basejam's new 12" for Redux. I really liked the first few releases on Redux, but they sort of lost me last year with a string of rather generic nu-disco records. Their first release of 2011 by White Elephant has to be one of the best 10 inches of vinyl I own though, and this new release by Ron Basejam (or James Baron, if you're not into the whole anagram thing) is a proper clusterbomb of a record.

Get Closer on the A-side, with its gentle drums, smooth vocal samples and moody keys, is my pick of the litter (can't wait to start a set with this, just perfect), but the bass-heavy, squelchy slow funk of One Point will work a treat too. Sanfranman on the flip is equally badass, with its chuggy, broken drums sitting perfectly with the vintage vocal samples. Ron Basejam wraps things up with Hell No, another blissed out slow burner that features his own vocals (at least I think I recognize his voice from previous outings). Great stuff all around from mr Basejam - apart from opener Looter, which doesn't really do it for me - in a lovely screenprinted sleeve, essential tackle on a label that seems to be in the finest of forms.