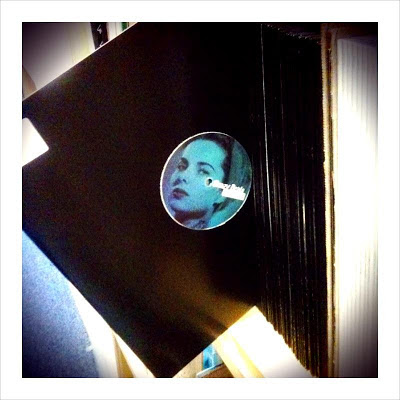 So here we are after almost 4 months since our last debut release on Sleazy Beats Black Ops: our sneaky little side-project that admittedly still remains somewhat of a clouded mystery in terms of genres, has hit its second release. As label heads however, what we've always been sure of and what we tend to consistently agree on...and this goes since way back in 2009 when we gave birth to the label - is what we think is hot and what's rather erm, not (read: what we'll put out on a piece of Sleazy wax). This synchronicity in tastes is obviously damn helpful when A&R-ing for new material as we live in separate countries and we're forced to spend hundreds of euros on bandwidth every month just to pay for our email banter, nitpicking, bickering and general good-hearted back n' forths.

Enter stage left, our second release with Frank Booker - a producer we're simply delighted to be able to work with as we've looked up him since his early days. Mr. Booker did a monstrous 12" for our final release in the original Sleazy Beats series, so we were quick and keen to bring him back for another round. Frank's sparse but heavyweight output usually consists of straight up rockers but always with his own special twist to keep things fresh.

Right then. Two shuffly, theo-esque stompers plus one pure megabomb is what's on offer here, the cherry on top being an interlude/dj tool to top things off. We've been playing these puppies all over the place any chance we get in the past few months with loving response from dancefloor darlings to djs and music beards alike - and we certainly hope you'll agree. Already been getting loads of drops from some of the big dogs in record/dj land too. Check out the samples below (in case you've somehow missed hearing about them from our incessant online ramblings)

All Ears Distribution writeup:
Following up Ben La Desh's excellent debut on their Black Ops sub label the SLEAZYBEATS crew have brought celebrated Kiwi beat merchant Frank Booker back to the fold with the Beat Down & Out EP. Frank's been less than prolific releases wise, but you can be sure every one is a keeper. Great EP's on Untracked, Japan's Wonderful Noise and the Fall Out EP - which was Sleazy's final release - sold out in week one. Much like the musical content of the acclaimed Hit It & Quit It radio he hosts with Recloose, Frank dims the lights and turns up the heat for his Black Ops offering, a seriously accomplished dancefloor weapon concocted from the finest samples, crispest beats and heaviest low end available. Years of experience in moving the floor, combined with the finest ingredients means the Beat Down & Out selection will be an enduring feature in the world's best record bags.

As usual with our Sleazy wares this one's limited to 500 copies only, no digital - no repress.

Pick it up at a fine retailer near you or hop online to one of these great shops to bag yourself a copy: