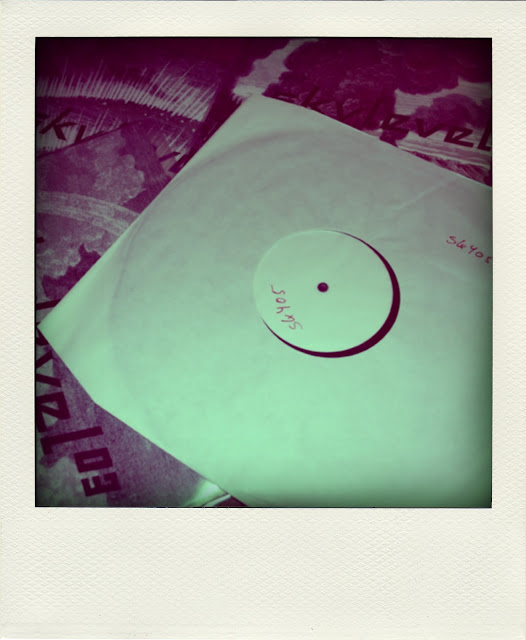 Before we publish our inevitable 'twelve of 2012' post and share some sharp observations with you (those godawful 90s chords, handstamped nonsense, kids jumping on bandwagons faster than Americans stocking up on assault rifles and some other particular pet peeves) we're sneaking in one last review before the year's end, as the very kind souls over at Skylevel sent us a test pressing of their next record and - rather unsurprisingly - it's rather immense.

We got the first EP on the label in the mail back in 2010 with hardly any info to go by. A 12" record with two reworks by 'Skylevel' and classy/etchy artwork on the cover. No names though, no address, no myspace/soundcloud/facebook/twitter/tumbler/googleplus, nothing, but the two tracks on offer were truly exceptional, proper driving and obscure disco tackle. Yes, disco reworks. I can almost sense your eyes glazing over but fret not: no overcompressed deephouse drums thrown under three timestretched loops here, but cleverly and lovingly re-arranged pieces of soul with just the right amount of grit and gentle added bits and bobs.  Here's one of the tunes of that first 12".

We've been keeping an eagle eye out for Skylevel ever since and picked up copies of Skylevel 2, 3 and 4 the second they hit the shelves. Alonside the Skylevel team, esteemed producers and reconstructionists like Anson, Nebraska and Tornado Wallace have joined the ranks and contributed amazing tracks to one of our favorite edit/rework series, which is about to reach its fifth installment. And the fifth one might just be the best Skylevel yet.

The uptempo, slap-bass driven disco stomper 'Changes' kicks things off on the A side. Think driving basslines, heavy drums, choppy vocals and soaring strings without a whiff of fromage. 'Picture Tomorrow', also on the A side, is a warm and loopy slice of midtempo heaven with driving claps and a melancholy guitar riff. Sublime stuff. We found a random youtube vid of it (there's some weird warpy sounds going on in the video that are definately not on the record)

Flip over for the BEAST that is 'Watch Your Step', a stuttering, chuggy groover with badass drums that keeps building and building until a familiar-sounding disco vocal breaks through. I cannot wait to bust this out at the New Year's Party we're playing and see it do the damage. The downtempo and dubbed out 'Smiling Stranger' rounds things off nicely with its broken drums and folky feel (I'm not sure but it might be a rework of an old John Martyn track, I seem to recognize his voice somewhere in the depths of the track). An amazing EP you ought to just buy without even listening and enjoy for years to come. It's that good.

Have a listen to (short) samples and pre-order here