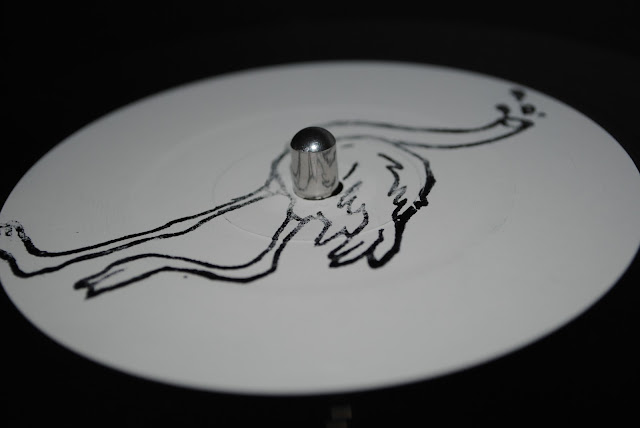 It seems there's a positive thing to come out of all the kids going crazy over 90s chords and big drums these days after all: there's a lot less shit disco edits doing the rounds. The same people that hijacked the vibrant and loving disco scene and swamped it with uninspired loops and overcompressed housedrums are now all merrily jumping on the 'retro house' bandwagon. Which is great, because it leaves us with a return to the basics of editing: A) unearth forgotten gem, B) strip off the cheeky bits C)  re-arrange for maximum dancefloor fun and D) have reconstructured gem properly mastered so it sound fresh as a daisy again. There also seems to be a renewed interest in somewhat obscure krauty, cosmic numbers from the days of yore. This new 12" by Disco Cuatro/CVLT is a great example of disco anno 2013, proving itself far more resilient than most people thought when the edits craze was at its peak two years ago.

I have no idea who's behind this release (never heard of Discos Capablance, Disco Cuatro or CVLT before) but Mojo Working is friggin' ace. It's a lovely, wobbly, hypnothic pitched-down chugger that builds on  dusty, infectious country guitars and a female vocal going 'I got my Mojo working, but it just won't work on you (Etta James famously sang that tune back in the day, but it seems the Lisbon-based CVLT dudes gave another version of that song the razor and tape treatment here). Should come in handy for those of you that play bars, warmup sets or need a crackin' track to close off a brilliant night.

Desperate Flamingo on the other side is an uptempo disco number that starts out with some nice keys but rapidly turns into a crazy, squelchy ride through pyschedelic cosmic wave soundscapes that in all honesty doesn't do much for me. Mojo's definately worth the entry ticket though.

Limited to 300 copies and comes with a stamp of a beheaded ostriche, what else could you possibly wish for? It's selling out superfast so don't wait too long to pick up a copy.