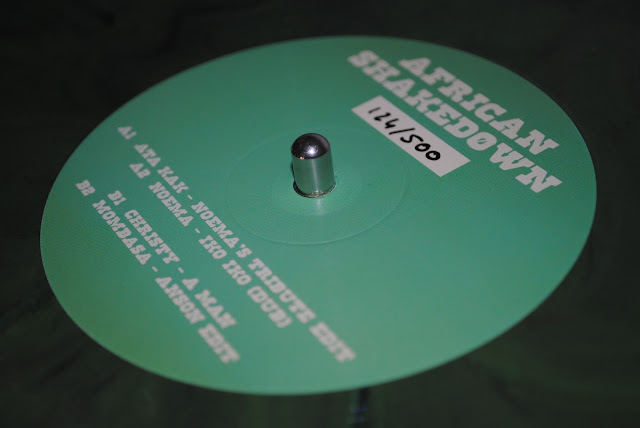 We know it's a bit of a faux-pas to blog about records that are old news or impossible to find, but we'll simply have to make an exception for African Shakedown, a heavenly slice of African disco on that came out on green marbled vinyl in November of last year. And yes, it's going for absolutely ridiculous prices on Discogs these days but a repress is in the works. So there.

We missed the record completely when it came out (which isn't that strange, it sold out in a matter of days and we'd never heard of Noema & Anson who seem to have curated the release) but managed to find two copies deep in the bowels of Hungary (shout out to the people that invented the internet: good job, it comes in handy sometimes). The fun starts right away on the A with Noema's Tribute edit of Ata Kak's 'Daa Nyinaa', an irresistable chunk of uptempo afro-disco and easily the catchiest tune I've played around the house for a good while. Noema didn't do all that much, he kept the killer vocals in tact (doesn't matter one bit you have no idea what he's on about, it being sung in one of the 79 languages that Ghana recognizes), beefed up the bassline to perfection (mad bottom end) and gave the track a much needed extension. On the same side of the record there's 'Iko Iko Dub', a pleasant enough dubby chugger. Highly doubt you'll ever play it though, as it's hard to plant that needle past the first kick of Daa Nyinaa. Have a listen below:

On the flip we get treated to a full length version of Nigerian songstress Christy Essien Igbowke's "You Can't Change A Man". In case you haven't heard it before (it featured on a couple of compilations on BBE and Claremont recently), it's a gorgeous bit of African soul that I've been playing over and over since I got my filthy little hands on this record. Finally there's Mombassa - Anson. Not sure what the source material is here but it's another lovely affair with sweet trumpets and mellow vocals. A fantastic record, hope the guys that put this out will unearth some more afro gold for us in the near future.


Keep em peeled for the repress (which will be on regular black vinyl, which should please the audiophiles amongst you) and make sure you don't miss out. Great to see Afro-rhythms get some attention again. If you like this stuff, also make sure to this first 10" by Edits Des Amateurs a whirl, it's grand.