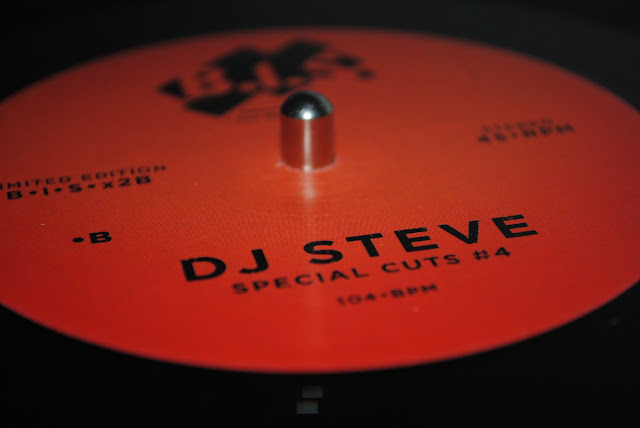 This delightful new release on Beats In Space sublabel B.I.S. is flying off the shelves at the moment and comes in limited quantities, so chances are by the time you stumble upon this post it'll be long gone, but this record is way too good to not spend a few words on, so here goes.

According to the release notes, Tim Sweeney met up with DJ Steve on a trip through Europe a few years ago. He'd heard good things about this butcher-by-day / DJ by night in a small town in the south of Italy and looked him up. Steve subsequently let Mr. Sweeney sniff out some of the edits he'd been doing for personal use in his marathon sets (Steve is a bit of a local legend for his monster sets apparantly). Fast forward to late March 2013 and we're looking at the second pair of tracks that Sweeney snapped up.  As far as edits go, these are pretty much perfect again.

Special Cut number 3, hogging the A-side of the release, is an edit of the Destroyers' Slave of Love, an ace bit of leftfield 80s electronic disco to begin with, but Steve cleverly re-arranged the track, creating a long and hypnotic intro before the wonky and slightly haunting vocal finally gets going.

Flip over for #4, a bit of a balearic masterpiece if I may be so bold, supersmooth and lush from start to finish, which is all the more amazing when you have a listen to the source material - the rather uptempo and rather forgettable Alive with Love by Cut Glass - which Steve cut up and slowed down to a most leisurely pace, using just a few instrumental parts to create an amazing and mesmerizing,  moody, gloopy disco nugget that's screaming for the white isles. My pick of the two tracks - just by an inch though, they're both fantastic.

A fantastic pair of edits then, totally worthy of all the hype. Hit up your local record emporium for a copy or have a look at one of the bigger online retailers to see if there's any left.