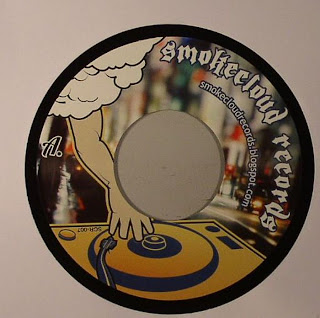 While we gear up for what should be a fantastic Record Store Day (but let's face it - it should be record store day every day) this weekend we're perusing some gems we've amassed over the past few weeks and came to the realization as to how many top tunes have been dropping left right and centre as of late. Prime example of this is the spanking 7" that our friends over at Smokecloud have just put out, which has been somewhat of an anthem chez Sleazy HQ.


In case you're not familiar, Smokecloud Records out of Atlanta has become somewhat of a homegrown name of sorts serving up delectable beatdown dub, hophop, fuzzy disco and dub grooves on wax for the past few years. Run by Dj Osmose aka John Bailey, hardened collector of the black stuff and seasoned dj and producer in his own right - you should expect nothing but the ripest cuts plucked from these genres. For this, the imprint's 7th release, what better format then, than a lovely little 7'' by sleazy fave B-Jam (we covered B-Jam's first Smokecloud release back in 2011) dropping two straightup beatdown corkers.

Pick of the litter is on the flip - 'Everything' a killer rub of an old Brenda Lee Eager tune 'When I'm With You'. The piano takes precedence in the forefront of the tune, along with an eerie flute note floating along perfectly alongside Brenda's lovely vox. A steady, beefy but off-kilter drums chugs along with snappy hats and snippets of her voice float and cut in and out. A sombre but soulful tune that's been on the decks for a good bit. Fantastique.

A-side is an edit of a 'classic' of sorts by Mr. Ayers, 'DC City'. Drums are thickened and the hook's swirled and looped, add a dash of fx on the vocals, and the end result is a heavy hiphop reinterpretation - one that makes you want to drop it out on a rig whereas the original might only have been one to put on in highschool when you were trying to score some makeout action with little Suzie. You can snap this up stateside at Crosstalk International, or in all euro and UK haunts. Juno has it in right now for example, fill your boots HERE and play it loud.
B-Jam Dj Osmose Enos Smokecloud