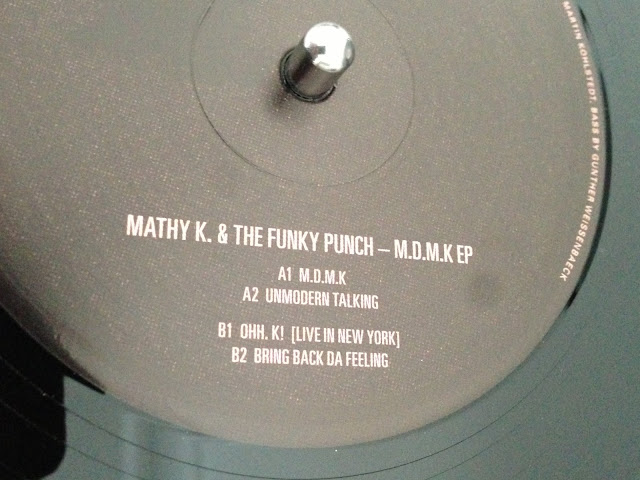 As if there weren't enough mysterious and covert German artists around, kraut disco-funk trio Mathy K and the Funky Punch (re?) emerge on the scene with a new 4 track ep ripe enough to do the damage in our little world. Although their extremely tongue-in-cheek bio claims they began their musical escapades during the ripe year of 81', their band pics might suggest otherwise...

This lush full sleeved ep arrives on Hamburg based imprint 2DIY4, sister imprint of the Diynamic label run by the likes of tech/house big boys Stimming, H.O.S.H., Solomun, Adriano Trolio (and a bunch of other guys who are unknown to us - lackeys who fetch the coffee and bagels for the former 4 honchos we presume). A somewhat more cheeky, deep and disco output than Diynamic - 2DIY4 is one we'll be keeping a closer eye on after this monstrous ep by MKATFP.

As mentioned, we're talking 4 tracks of killer no filler - nothing diluted here. Kicking off the A, 'MDMK', and 'Unmodern Talking' are 2 of the housier cuts, boasting the most looped and 'straight-kick' sound of the bunch, however still with plenty of funk, class and out of the box elements like posh disco lazers in the former and slices of Bootsy-ish vocals in the latter.

Flip to the B for the live cut entitled 'Oh K!' that gets massive flair points for crowd jeering, organ and handclaps that sounds like they're actually bustin' out of the 12" - while Mathy K's sly vocal comes in at the break to let you know who you're listening to before cracking back on beat. Finally, the playful 'Bring Back The Feeling' has a tight funked-up future/cosmic disco feel with guitar plucks, and to breakdown with lo/hi-pass that works to great effect.


All in all a really terrific package on offer here then, and one that's set to be in the bag all summer methinks. Already starting to sell out in a couple of the haunts so do yourself a favour and grab a copy. Juno has some HERE. Nab one while they're still around instead of that Get Lucky single - you know you'll be well sick of that in a few months.
2DIY4 Mathy K and The Funky Punch