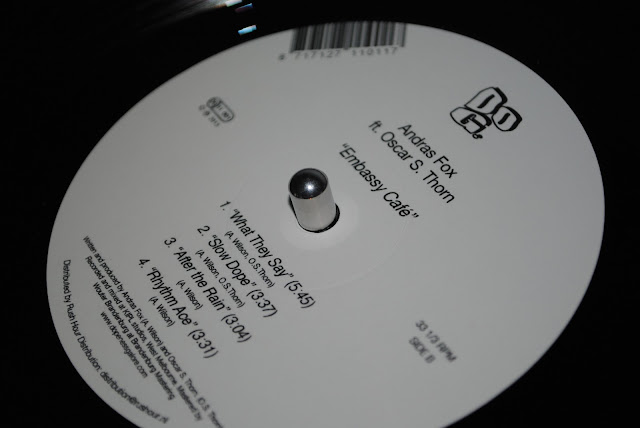 Andras Fox just released a mini-LP on Dopeness Galore of truly staggering badassness that I've been itching to write about. The Dutch imprint already was on a bit of a roll with very strong missives by Kid Sublime, Rahaan and Inkswel, but seems to have really struck gold here. We've been following young mr. Fox for a while now and were already most impressed with his record for Audio Parallax (which we covered on these pages a while ago). For this latest endeavour he teamed up with singer Oscar S. Thorn and the result is sheer magic. If you enjoyed Mario Basanov's & Jeremy Glenn's recent effort on Apersonal you'll love this record.

The gloopy midtempo boogie of Romance on the A1 sets the mood nicely with its crazy bottom-end and crisp vintage-sounding analogue drums. Running Late, also on the A, draws on the same elements (lush midtempo groove) but Oscar S Thorne's high-pitched fantastic vocals are what make this track truly remarkable. I've listened to this track a dozen times today and it sounds absolutely incredible, so much oomph and drive yet so soulful and fresh, love it to bits.

Flip over for 'What They Say', another collab with Thorn and it's every bit as good as Running Late. Gentle melodies and vocals gliding over MPC beats and sharp shuffling hats and it just works a treat. On 'Slow Dope' Andras Fox drops the 4/4 approach in favour of a broken beat pattern but things get a bit too leftfield/wonky for me here. There's two more tracks on offer though, the wonderfully deep and moody synth workout 'After the Rain' and the downtempo chugger Rhythm.

A delight of a record, highly recommended, should please disco and deephouse heads alike. Out now and available at Rush Hour, all the other haunts will get stocked soon. I picked this up today and the guy behind me in line was also really excited about the record (he was buying his second copy) so I have a feeling this one is going to be a bit of a hit. Now bring out the sun too yea?

One of the year's essentials without a shred of doubt