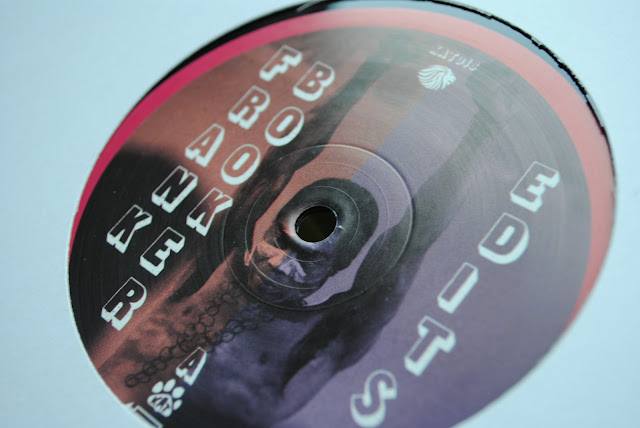 This has been out since Record Store Day but it's taken us a while to get a hold of, and as a general rule we don't cover records on here we don't actually have/own, so here we are, way too late, with a glowing review of Frank Booker's 12" for the classy Kat imprint.

Our Kiwi hero has been in the finest of forms lately with a string of records for esteemed American imprints Kolour LTD and Razor 'n Tape, and there has been talk of a record for the mighty Disco Deviance series too. Our favorite recent bit by Mr. Booker is his missive for Kat Records though, a trio of amazing afrobeat reworks which didn't get much hype when it first came out. Surprising really, as there's so much to enjoy here. Take 'Synchro Systeme' on the A for example, a chuggy rework of King Sunny Ade's classic. Going for a 4/4 approach and busting out his trademark killer drums, Frank delivered a majestic groover that should work a treat on any beach, bar or warmup floor. We've been playing this cut over and over since we got the record in and those guitar licks and sweet vocals just keep getting better and better. Give it a whirl below.

There's also a delectable rendition of Fela's Egbe Mi O on the B side, which had been doing the rounds in the digital circuit for a while before but now finally gets a release on vinyl. Again it's absolutely sterling stuff on a midtempo tip. And while the B2 on many a record these days tends to be nondescript filler (or a dreadful 'nu-slomo' cut), Frank and the Kat crew deliver the goods with 'People Must Jam', a loose disco/sample/handclap fest that draws on the same source as Tornado Wallace's 'Swimming'. Mental tune that will whip any crowd into a proper frenzy.

If we had a star rating system this would easily be a 5/5 on the sleaze-o-meter. Pure class, fingers crossed we'll be seeing more afro-oriented disco doing the rounds.

Pick it up here