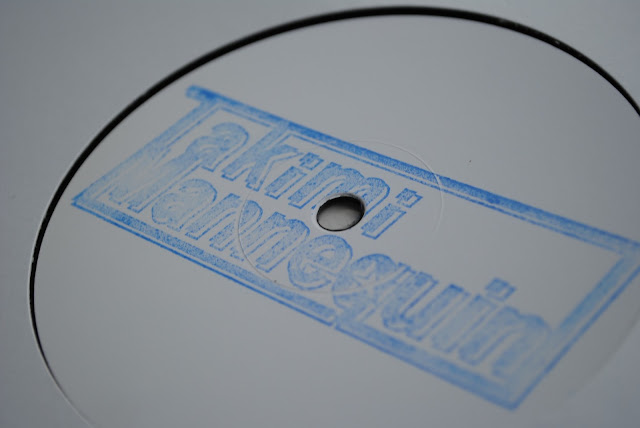 Really happy I managed to bag a copy of this superlimited slice of vinyl-pie, on which Kenji Takimi (of Being Borings fame) teams up with the House Mannequin crew and drops a killer edit of what sounds like a cover of Exile's 'I Wanna Kiss You All Over'. It's a one-sided, handstamped and hand-numbered affair, only 400 copies were pressed up and only 100 are sold in Europe, the rest is exclusive to Japan. I'm actually not a fan of one-side vinyl at all (bit of a pisstake really), and I'm not too big on the handstamping craze either but I gladly made an exception in this case and raided my daughter's piggy bank for nr. 364 out of 400.

'To Tonight' the tune is called and it's a 7 minute choppy stomper of a beatdown disco track. Crunchy, driving drums get things going, looped strings make sure the tension remains tight throughout the track, choppy Parrish-style vocals are dropped left and right and Takimi has conjured up some mean drops and breaks to top it all off. It all sounds very raw and cut 'n paste (drifts like crazy too) but that only adds to the magic here. It's basically a mad and relentless peaktime bomb that will have people stomp their feet, stick their arms in the air and go 'whooooo'. In a good way that is.

Couldn't find a proper clip of it anywhere so I upped it to Youtube for good measure (I know, we're awesome)


Oye Records in Berlin have a few copies of this left, get one now before you find yourself trying to communicate with a friendly soul in the land of the rising sun and paying silly money for shipping from Japan.