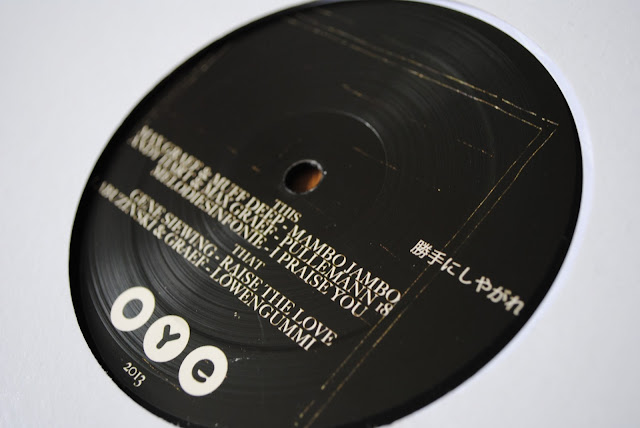 Add to cart without listening. That's how we roll when it comes to Box Aus Holz, which has been our favorite imprint for a while now. Just got a fresh one in and it's another amazing piece of work. With BAH06 (which, rather confusingly, is actually the fourth vinyl outing from this Oye-affiliated label) young Max Graef and friends once again prove they have the balls to experiment and push the boundaries of their sound instead of sticking to a comfortable and successful formula. A commendable approach for a label that has to rely on vinyl sales alone.

Max Graef & Muff Deep (who starred together on an ace recent twelve for Tartelet we covered on here as well) start proceedings on the A with Mumbojambo, cleverly fusing dusty beatdown house with serious hiphop stylings. The result is a wonderfully chuggy samplefest that grooves like the proverbial. Andy Hart gets flown in from Melbourne for some more teamwork with Graef on Pulleman, a serious chunk of driving uptempo deephouse with more hiphop magic dust sprinkled on top. The A3 is a short but sweet J Dilla-type slice of instrumental hiphop, neat little bonus on an already action-packed A side.

Flip over for Gene Siewing's 'Raise the Love', a low slung groover with a murderous bassline, bitchin' drums and clever use of samples. Keep turning to this cut when I throw the record on, irresistible. Finally, the Graef/Labuzinski combo makes a welcome return to BAH with Lowengummi. It's a wonky, stuttery and techy ride but the warm bass and drums keep things nicely in check. Reckon this should do serious damage in a dark basement in the wee hours.

Another amazing record then, vinyl only and limited as ever, which you should pick up directly at the source