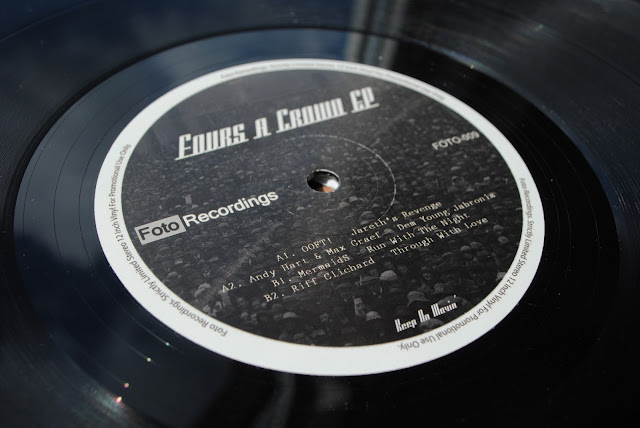 Remember those days, right after the demise of the faux-hawk and just before the onslaught of the hipster chino, when people still read blogs and slo-mo was all the rage? Back then, there was one blog to rule them all, and that was the OOFT page, curated by Ali Herron and The Revenge. I used to religiously check that site several times a day to see if they had posted a new edit, rework or youtube video of some forgotten scandalously good boogie bits from the 80s. When we released our first record in 2009 (Eddie C's 'Space Cadet EP') we got a kind mention on the OOFT blog, which was a really big deal for us at the time and really helped us get noticed. Long story short: OOFT was a huge source source of inspiration and we can safely assume that without the guidance of OOFT, this whole Sleazy Beats venture wouldn't have materialized.

Well now, while times sure are a changing, blogs might been made largely irrelevant by Facebook, slo-mo might have been dragonpunched by throwback house and The Revenge might have moved on to pastures newer and greener, we're still loyal fans of Ali OOFT and his burgeoning OOFT imprint, which has been going from strength to strength recently. Luvless' Motion Clapture off the Pitched Down Jamz EP (FOTO007) has been one of the finest tracks of the year as far as we're concerned, and Ali's own LGB that featured on FOTO008 is a total weapon of mass destruction that we've played at pretty much every gig we got to display our wares at this year. About time then we put the label in the spotlights, and what better excuse than a new record being released?

FOTO 009, The Four Is A Crowd EP, is the second sampler on the label and comes with - you guessed it - four tracks by four different artists. Ali kicks off proceedings himself with 'Jareth's Revenge', a slick slice of 80s sounding, loopy boogie with spaced out synth lines. If you were into Ali's LGB, or Mark E's output for Under The Shade and MERC for that matter, you're going to love this hypnotising groover. Max Graef and Andy Hart join Ali on the A side with 'Them Young Jabronis'. Fans of the pair should know what to expect by now: warm, dusty, sample-heavy chugging midtempo deephouse done to perfection.

Flip over for MermaidS's spectacular 'Run With The Night', my pick of the litter. We picked up MermaidS 'MermaidS One' 12" last year and were really impressed with the tension they manage to create in their loop-centric tracks. It's that same formula that works so well here: chugging loops and crunchy drums keep building for a few minutes, new elements keep getting added to the heavy groove until a vocal comes out of the woodwork and things really take off. Can't wait to try this out, I can only imagine how well this must go down (scenes of really dirty birds throwing their panties at the booth with lustful eyes come to mind).

Riff Clichard takes care of the final track 'Through With Love', a dapper midtempo boogie bumper with chipper drums and vocal snips we've heard a million times before but somehow really seem at home in the snappy grooves we're being treated too.

A truly amazing EP with four tracks that all have their time and place in a decent set. No filler here, but proper value for money. I'm surprised this isn't topping sales charts at Juno - in all honestly I've been baffled with the junk that HAS been topping the sales chart as of late, but that's a different discussion altogether. For now, I'd highly recommend getting your hands on one of these babies while the vinyl is still available.