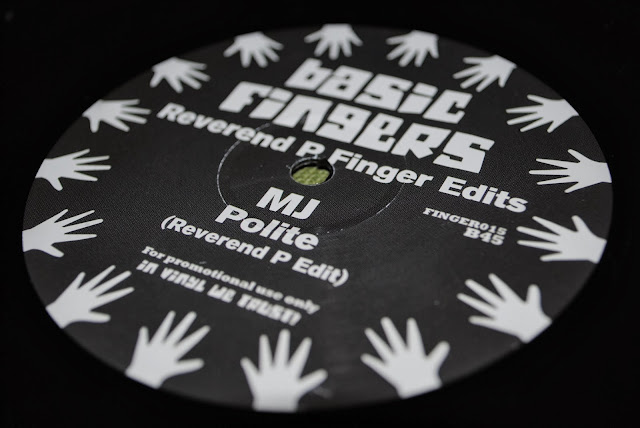 It seems awfully quiet in disco edit land, which is odd, considering it was all the rage to complain about the omnipresence of edits a mere 12 months ago. Then again, maybe it's not that odd, because virtually every single track ever made by mankind has by now been edited at least once (and most likely again by Rayko) and new, housier bandwagons were eagerly jumped on by many people that were never really interested in disco in the first place * coughgoodriddancecough *. A few imprints that were already around before the halcyon days of the last edits craze are still going strong though, like C.O.M.B.I, Disco Deviance and Basic Fingers. It's on the latter that newcomer Parisian 'Reverend P' makes another appearance after having impressed with a pair of sterling EPs for G.A.M.M. earlier this year.

I won't bore you by paraphrasing the release notes and telling you all about how we're dealing with a seasoned house-producer who started promoting Motown parties in Paris and editing tracks to make them a little easier to play in his sets. I will however tell you that his edits are a proper breath of fresh air. No overcompressed, loop-driven housed-up disco drivel here, but classic soul cuts lovingly touched up with subtle additional production, of which the soft drums stand out in particular. The A side of his Finger Edits EP is an extended rework of the great late Gil Scott Heron's 'Three Miles Down'. Crisp drums and gentle percussion create the perfect conditions for Gil's heartfelt and classic song about poor miners slaving away for the man. What's not to like?

Flip over for an utterly irresistible rerub of the Jacksons' 'Being Polite', which originally came out as the B-side of one of MJs biggest hits - Shake your Body Down to the ground. I think Reverend P has an even bigger soft spot for old MJ tracks than we do, as his edit is both tasteful and respectful of the Jacksons' incredible musicality, leaving it mostly in tact but making it just that bit more DJ friendly. I played this out last weekend and it got the girls dancing and the guys smiling from ear to ear within three bars. Good enough for me. Check it out below!

Basic Fingers have been on a real roll lately, happy to see the Local Talk lads still pushing this alongside their ever more popular house venture. Pick up a copy here and file under 'get out of jail for free whenever the need arises'