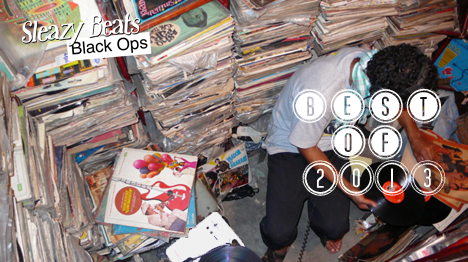 Another year almost over, can't believe how time really does seem to be flying these days. Seems like only yesterday we were compiling our 'best of 2012' and bitching about those omnipresent 90s chords while we were at it. Speaking of 90s chords, one of the highlights of the year was throwback house's fall from grace over the past few months did put a smile on our faces (even if we got butch UK garage house in its stead which is just about as bad). For us personally, 2013 brought many delights, most notably a daughter for Kris and a son for me. And while these little buggers are to blame for our semi-permanent catatonic states of mind, there's nothing quite like that first toothless smile, is there. Oh happy gums.

Meanwhile at the Batcave, we added two new babies to the Black Ops catalogue in 2013 too. Ben La Desh did us an amazing follow-up EP, incorporating afro-rhythms and hiphop vibes in his ever-evolving, inimitable style, and we managed to talk men of the moment Andy Hart and Max Graef into releasing their first EP as a duo on Black Ops. Both records sold out in a matter of days and are changing hands for crazy money in the second-hand market now, so we must be doing something right (or terribly wrong, I hear you thinking). We also set up a new outlet for beardy, moody electronics in the form of Fools & Fables, but due to pressing issues we'll have to wait till next year for the first missive to see the light of day. We have some great stuff lined up for Black Ops as well, with new music by Luvless & M.Ono, Andy Hart and Saine. No rest for the wicked.

As always, we spent way too much money on new (and used) records over the past 12 months. This year's rather considerable stack is pleasantly varied too. A fair chunk of disco, a smattering of house, a dollop of beardy downtempo and even a pinch of beatless leftfield soundscapes indicate 2013 was an interesting year for music. We tried to cover as many of them as possible on the blog, but there never seems to be quite enough time does there? Either way, these are the 13 records that really struck a chord this year, in no particular order.

Almost left this out because it was sold as a 'limited, handstamped and handnumbered' release but got repressed the second there was an interest (which is not okay in my book). It's an amazing and mesmerizing piece of music though, one of the tracks I've played the most this year. Made up a little for Nature's disappointing LP on Golf Channel too.

Arguably the biggest edit of the year, those of us lucky enough to have bagged up a copy know how much damage this does when played on a decent system. Not likely to leave the bag ever again.

Tommy Awards' seminal downtempo number Blind Andy gets transformed into a deep, dark and atmospheric masterpiece by Coyote. The rest of the EP is utter class too.

Proper spinetingler by Finland's Saine, an incredible nugget of piano-led machine soul. Pure class from a producer we'll be hearing a lot from in 2014.

The man with the midas touch in 2013 with one of the absolute deephouse highlights of the year on his own label. Very happy we talked him and Andy Hart into releasing an EP on Black Ops.

In the land of moody downtempo soundscapes Begin is king. He cemented his reign this year with two new releases on his Begin imprint, both of which are timeless pieces of sheer brilliance. Close your eyes and feel the sand slipping through your toes.

Out of the Basement - Take Me With You (Rack 'n Ruin)

Bassline! All about the bassline. Total party starter this, has been in the front of the bag since it came out and has become a staple tune in our sets.

We waxed lyrically about this edit on the blog earlier this year and it's been in heavy rotation ever since. Masterclass in what editing is all about: re-arranging those bits and parts of a mediocre original to create a driving, stringheavy disco beast.

Our unsung hero Frank Booker had a relatively prolific year with records for various labels, including Razor 'n Tape, Kolour LTD, but our favourite was his EP for KAT with two killer Afrobeat reworks and this lovely boogie bumper. God we love Frank Booker.

As much as I love and respect mr. Parrish, quite a few of his records just aren't for me. This glorious 10 minute midtempo chunk of moodiness definitely is though. Brilliant stuff for serious home listening.

The standout cut on the much-hyped debut release on Zambon's Very Polish Cutouts. Lush downtempo wonkyness that'll have you sing along in your best faux-Polish.

Leftfield warrior and king of cool DJ Sotofett gets the award for curveball of the year for his incredible remix of Prins Thomas' Bobletekno. Ten glorious minutes of midtempo wobbles, synths, percussion and drifting melodies, can't get enough of this.

That's it, our thirteen for 2013, happy hunting if you missed any of these. A big thank you goes out to all the people that bought one of our records, the promotors that offered us the chance to play out a few of these, the label owners that kindly sent us records to review and everyone that's still reading our ramblings one here. Here's to a wonderful 2014!