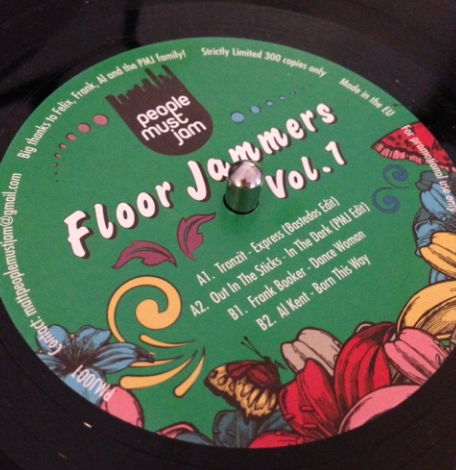 One of the best records we've picked up recently is by a conglomerate of party people from the Australian hotspot Sydney. These baiz have been putting on some of the continent's best parties for the past few years (they just had their 5th anniversary to be precise) and to ring in that major accomplishment they've decided to take on a new venture and slap some of their favourite artists' tunes to wax for their first release on new imprint People Must Jam. These guys have an eerily similar taste to music to us SB chaps, as they've gone and enlisted tunes by none other than heavyweights Out In The Sticks, Al Kent, and Frank Booker - who are 3 acts/producers we hold in mighty high regard and have covered on these pages many times before. The EP in question, entitled 'Floor Jammers Vol. 1' is packed with exactly that - 4 cuts of mass weaponry that are ready and able to pack em' tight under the disco ball quicker than a knife fight in a phone booth. Like green grass through a goose. Quick, real quick.

Let's start with the B - where our beloved Mr. Booker takes hold of things with a monumental tune, 'Dance Woman' - a fantastic edit of Crown Heights Affair's 1979 hit 'Dance Lady Dance'. A big ol' Booker tune - if you know his stuff, and if you've been following our ramblings you know his wares already. Needless to say - no disappointment ever with the man. Fantastic Booker cut, lethal really. Have a listen while you read on: Stalwart disco king Al Kent unearths a perhaps forgotten gay anthem from the 70s: 'Born This Way' by Carl Bean. Kent toughens up the drums, tightens up the vocals and cleans things up nicely to make what might not have been the most playable original into a big badass disco stomper in his inimitable style. On the A side we get the Bastedos (of Foolish Felix/Bastedos label fame) edit of Tranzit's 'Express'. Another badass tune with loads of Maurice Fulton-esque bubble guitar/bass, and a lovely synth line that smooothes things out at the half. Wicked stuff. Finally OITS (who are no stranger to these pages, search and ye shall find) along with PMJ on edit duties churn out a top shelf stomper, 'In The Dark'. Fat bassline, catchy guitar riff and spoken word vocal about working..well um - in the dark…Really unusual kind of vocal, but works super well with the semi-dark tune it's working alongside.

To top things off we're treated to a really nice and heavy 180g slap of wax here. The artwork is also bloody fantastic. Limited release that's already starting to show up as out of stock in many shops. Rush Hour in Amsterdam has a couple left HERE, however. But be quick and grab one before they're gone completely, and help celebrate the first release of these cats. Cheers on the maiden voyage PMJ crew - and here's to many more!
Al Kent Bastedos Frank Booker Out In The Sticks People Must Jam Tranzit