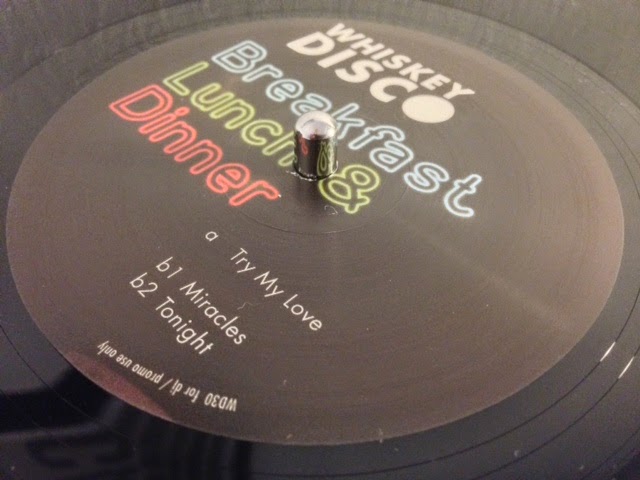 It's no secret we've been devoted fans of all things Whiskey Disco since pretty much the halcyon days of Sleazy Beats; pre-label where we were just busy blogging away, MOOB. If you care to, take a quick scroll all the way back to the first page on this here little blurg and you'll quickly notice that the first actual review from way back in summer 2009 is of a Sleazy McQueen 12" - Whiskey Disco ambassador and founder. Ah how serene and pure those days were, before we became ultra-jaded sleep-deprived jackalopes.

Jump in the time machine and hit 2014 where our man Schleazy is still running WD with reckless abandon and furious anger. He's done so with great success I should add, and all the while upholding a smattering of dj dates worldwide: Asia, South America, Europe and South Africa all this past summer if I'm not mistaken. His beloved Whiskey Disco label is no longer in its' infancy, as you can imagine, but rather has just rounded out its early thirties. So kudos to you, monsieur McQueen.

We've covered Whiskey Disco releases on these virtual pages in the past so we'll spare you the labels' mantra, and just cut to the chase shall we? To celebrate the imprint's 30th wax outing, they've harnessed the talents of newcomers Breakfast, Lunch and Dinner to kindly set the tone. The aptly titled 'Open 24 Hours' Ep has been out in all fine record shops now for a few weeks, and has on offer three gigantic disco stompers that are purely set to wreak great vengeance on any judicious dancefloor and are liable to get even the beardiest of chin strokers to cut a shuffle or two. Let's let the music do the talking for the first track, just click 'play' below to peep the A side of the record - a fantastic rub of Sharon Redd's 'Try My Love' and read on.

After digesting that nugget flip the record over to unleash the ol' bside, beginning first with a fifth-gear rendition of the Jackson Sisters' 'Miracles' (a b-boy/breaker fave). Breakfast, Lunch and Dinner have left much of the original intact here, only chopping some of the vocal, instead relying on looping the infectious chorus to great success, beefing up the drums and bringing out that grinding wah-wah (what instrument is that, I have no idea). Finally Narada Michael Walden's 1979 hit single 'Tonight I'm Alright' gets an inflation. The original is badass - yep, and this is easily as good, a ramped up discofied rendition.

Improve both your record collection and your life by picking this up. Grab a copy here - CLICKETYCLICK