Our favourite records of 2014 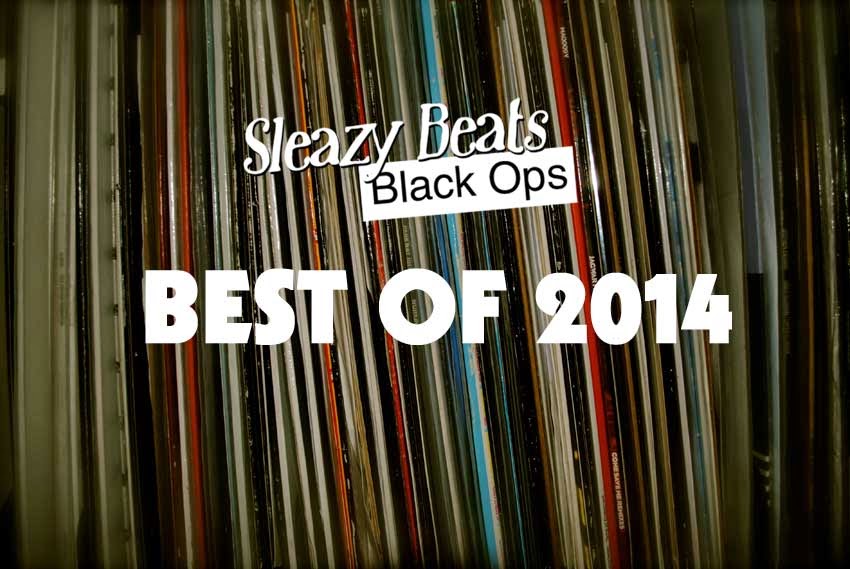 I'm almost past my disappointment of Santa failing yet again to drop off a DJR 400 this Christmas. Even a pair of Shure Whitelabels wasn't in the cards. That old geezer sure is turning into a stingy bastard isn't he? (I might do up next year's letter to the bearded philantropist in comic sans, that might win him over). Really shouldn't complain though, as we've had another incredible year. We got to release three records on our Black Ops imprint, which all sold out in a flash. Saine's EP went so quickly we were accused of being 'misguided elitists' on Discogs for sticking to our guns and not repressing it (!). Andy Hart's 'Love Technology' and Luvless' Part of Me were met with the same frenzy - thankfully without the aforementioned online abuse so far. After a proper pressing drama at the tail end of 2013, our side project Fools & Fables also finally came to fruition this year and we're really proud of the first two releases on that label, they're very personal records to us. Both missives sold out in a jiffy too actually, which is absolutely incredible, as we're still just two young dads armed with crummy laptops, no clue as to how this music industry actually works and a relentless vinyl itch we scratch way too often.

A big thank you goes out to you beautiful humans who let us put out your wonderful music and to all you lovely specimens picking up the records in the shops. Our fabulous distributor All Ears deserves a shoutout too, we'd be nowhere without them. We're obviously a bit biased, but we think we have some rather brilliant stuff lined up for 2015. More on that later though, time for one last look at the year that's about to be over. We went through the 2014 stacks of vinyl this week (bigger than ever, in spite of our resolution to tone it down a little this year) to put together our annual, completely subjective 'best of' post. Thanks for bearing with us for yet another 12 moons, see you on the other side!

5. Waldemar Schwarz - Krav Maga Girls (Golf Channel)
Golf Channel reigned supreme this year, and their domination of the classier end of the disco/deephouse scene started with Waldemar Schwarz. The former Rollerboys man - you might know him by the name of Bogdan Irkuk - dropped a pair of absolute gems that sound like nothing out there. Fresh, authentic chuggers that will liven up any party. Essential gear.

4. Ptaki - Warsaw (Young Adults)
Polish duo Ptaki got picked up by L.A.'s impeccable Young Adults and delivered a sensational EP for them. When label owner David Fisher sent me an early promo I was blown away by Warsaw, a seemingly effortless fusion of downtempo house and deep balearic moodyness. We both quickly agreed he stumbled upon something amazing and timeless. I've had the record for a good while now and keep yanking it off the shelves. Outrageously good this.

3. Be - Monday Club / Tuesday Night (Sweetsticky)
Be's 'The Seven Movements', the debut release on the elusive producer's own Sweetsticky imprint, was one of the year's absolute highlights for us. I paid an arm and a leg for it and had it flown over from Los Angeles (which sucks balls when a repress surfaces a few months later by the way) but it's a stunning affair from start to finish and well worth the money. KDJ tried his hand at pushing that dusty Detroit beatdown sound this year with his much hyped Moodymann LP but in my humble opinion that LP wasn't a patch on the machine soul music that was coming of of Be's Manchester-based soul kitchen.

2. Andrew Ashong - Special (Which Way)
Most of you will have heard this record at some point this year. I've seen it pop up in several 'best of 2014' lists, and even grumpy rock journalists seem to appreciate Ashong heartfelt 'Special'. It's one of those records that always seems to suit your mood, whether you're happy, sad, angry, hopeful, disappointed or feeling lost. I for one am thankful that Theo Parrish took Ashong under his wing and happy I found a copy of this record. Exceptional stuff.

1. Paxton Fettel - We Can Change If We Want To (Greta Cottage Workshop)
This is it, my favourite record/tune/discovery of the year. Paxton Fettel flew under my radar until Kris played a gig with him in Copenhagen this winter and urged me to check out his productions. Within 5 minutes I nabbed both records this young Danish producer and multi-instrumentalist released on Greta Cottage Workshop on the label's bandcamp. Many people complain about the lack of new ideas in electronic music and the endless stream of lazy, mediocre edits that are doing the rounds sure don't help things. And just when you think you agree with the moaning masses, 'We Can Change If We Want To' comes along and all of a sudden everything snaps back into place and you remember why you liked electronic music so much to begin with. Is it the amazing, soothing keys that make it so special? The claps Fettel recorded himself? The crisp rolling drums and percussion? I'm not sure, but his amalgamation of organic sounds speaks directly to my soul and - in my humble opinion - deserves a much, much bigger audience.

5. Dices - Nothing Is Over (Fields & Forests)
We discovered Dices back during his romp with Vakula aeons ago in the heydays of Shevchenko. Not long ago he re-surfaced with a stellar 12" on Fields & Forests, debuting as 'Untitled Gear' that easily stands above the rest of the drivel that passes for deephouse these days. Monsieur Monod covered another one of the tunes on these pages months ago here, but for me this one was the kicker. Thick bassline, fat kick, and lush vocal. Best live trumpet I've ever heard in a house tune to boot. Deep but not too much so…really keeps an edge too so as not to bore the pants of the dancefloor. Have lovely memories of playing this in Berlin at ://about blank a couple of months ago too, so yeah it makes the list.

4. E-Versions - The Shoe (Merc)
Mark E has lost the golden touch, he set the bar way up during his edit days and made some of the best records we ever bought, but hasn't done much we've loved since. His E-Versions on Merc have been ace though, and his rub of Jean Carn's Philadelphia Int'l hit 'Was That All It Was' is tremendous. Production wise, I know - it's quite lame - take loop, speed up, repeat for effect. But y'know what, sometimes that's all you need. The reason this is making the list is because it's been dancefloor tested on numerous occasions this year, and each time it's resulted in proper carnage. Killer track that'll be in the bag for a good while.

3. Payfone - Paradise (Golf Channel)
Yes, that's right. Two Golf Channel releases in our beloved 'Best Of' write up. Because we can. And also because the label has been throwing out heaters one after another for most of 2014. Mind Fair, Dj Nature, Project E, Africaine 808, Loose Control Band = a veritable slew of big rekkids. This release by Payfone aka Phil Passera features 'Paradise' which is one of the catchiest ditties of the year for me. Maybe it's the vox that bring a tear to my eye with wistful nostalgia. Robotic electro funk of the highest order this; it's what Metro Area sounded like it the prime f their game. Looking forward to more from Mr. Passera, needless to say.

2. Prequel - The Test Dream (Rhythm Section International)
Notorious Boiler Room host Bradley Zero stepped up his game in 2014, launching his ace new imprint Rhythm Section International. I completely spaced on the first release by Al Dobson JR. "Rye Lane Vol One', and now am tripping over myself to score a copy. Then came a versions release with Ptaki and Ruf Dug mixes, also spot on loveliness. Then enter Prequel's release of strange, dreamy and dubby house cuts, this one entitled 'The Test Dream' being the pick of the pack. Tune in and drop out, I've played this a million times so far since picking it up and it's not gotten stale in the least.


1. Lexx - Serenity (Phantom Island)
Phantom Island took our world by storm this year. Three BIG records by Foster, Kejeblos and grandmaster Lexx. It's no secret the Swiss master has produced some of our biggest tunes we own, and this one might just be the crowning jewel to top that list. The 'Young Corner' Ep really blew us away, all three tunes are boss. 'Serenity' on the bside though, oh man. Seriously the recipe for my ultimate feelgood house tune right here in one 6 minute escapade. Pure bliss, and is my number one track for 2014.