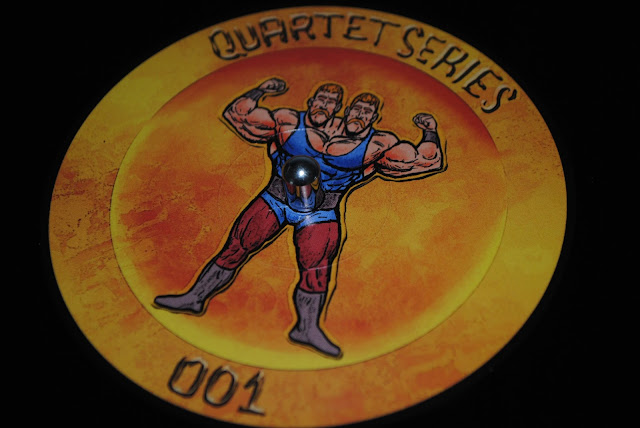 I remember meeting Maurits (Nachtbraker) for the first time in Amsterdam a few years ago in a bar in the western part of town, where we both happen to live. You never quite know what to expect with these 'producer' types. I've been in the game long enough to know there's a lot of bullshit going around, but right off the bat it was clear Maurits is no chip off the bullshit block though. At the time he had his first release out on Dirt Crew and some things lined up with Heist and was about to finish his degree at university. Over the course of way too many beers and lots of merry banter he explained he wanted to have a go at making a living out of this music thing. The plan was to sign up with an agency, release records through Dirt Crew and Heist and eventually set up his own imprint. This is usually the point where my bullshit swing-o-meter starts peaking, but even through my beergoggles I could tell this goodnatured soul with his winning smile meant business (even if he doesn't take life too seriously).


It's been fascinating to witness his ascent through the ranks ever since. He did establish himself as one of the core producers of both Dirt and Heist and has released a string of well-received records. He did sign up with Zeezout, one of the nation's most revered agencies, for bookings in Holland and did manage to land a steady stream of gigs abroad, including a recent tour in Asia. I was having breakfast with an old pal I hadn't seen in a while the other day, a proper househead, who mentioned Nachtbraker out of the blue. 'You ever hear of this dude Nachtbraker? Phoar he's good, keep an eye on him'. Once random people start mentioning your name, there's a fair chance you can keep a pedestrian dayjob at bay for a while, right?

Ever since that first beer-drenched meetup we've kept in touch to talk music and shoot the shit. About a year ago the plan to start a label started to get serious. Over a sixpack in Maurits' kitchen he laid out his plans for his 'Quartet Series'. It wasn't just to be just another imprint, but a proper 'concept' label: a testimony to his love for fusing the bright and sparkly with the dark and ominous and having the sweet and polished clash with the raw and gritty. 'Initially I simply had a sampler in mind with several different artists, offering different shades and styles to keep the record edgy, provocative, educational even, maybe, in a sense. The idea was to lure people over to darker shades of the spectrum by serving up an accesible A side'. A few weeks later he fired over the first sketches of the artwork, had a distribution deal in place and was having a crack at putting together the sales notes of the first release. Next-level getting-shit-done if I ever saw some.

Drop the needle on the A and it's easy to see what he was getting at with his good versus bad Spiel. A banger from Local Talk's Crackazat with loads of oomph and killer piano work alongside Prime Chops, a mesmerizing downtempo number by Saine, ease you into the first Quartet Series record. Saine's track brings some of The Polish Cutouts' output to mind and is easily our favourite track off the EP)

The concept of good versus evil naturally presented itself while scouting for tracks for the four records that are planned in the series.

'To a large extent, the concept reflects my broad taste in music and the way I like to program my sets as a DJ: from warmer house sounds to deeper dubby stuff, curveballs and a bit of proper techno'. After signing tracks as diverse as Saine's slouse and Gnork's wonky and twisted productions, the idea to present a clash of two completely different camps naturally presented itself'

The flip is where the bad guys roam. Nachtbraker himself goes all 80s on us with a deliciously twisted bit of boogie with tons of quirky sounds flying in and out. Gnork's 'Chord Tool' is a classy bit of deephouse meets techno with a fat kick, muffled claps, relentless hats, sublime drum breaks and, err, chords. Lots of em.

The concept stretches beyond offering different vibes though. A great deal of love and attention has gone into the aesthetics of the label. Commissioned storyboard cartoon art on the full-colour sleeve adds a narrative to proceedings that should appeal to collectors, as you'll need all four sleeves to find out how the battle between good and evil unfolds. As an added bonus the thing is pressed on heavyweight vinyl too, no corners were cut here. 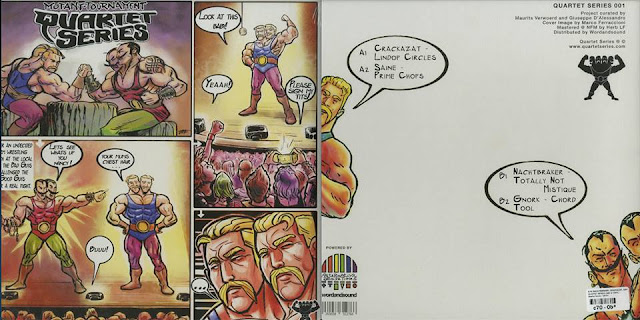 A bitchin' maiden voyage then, and with the sophomore outing on the horizon with tracks by S3A, Ponty Mython, NY*AK and D-Ribeiro (which I got to listen to a few weeks ago and they're bloody great) it looks like this is going a be special 'ménage a quatre' indeed.