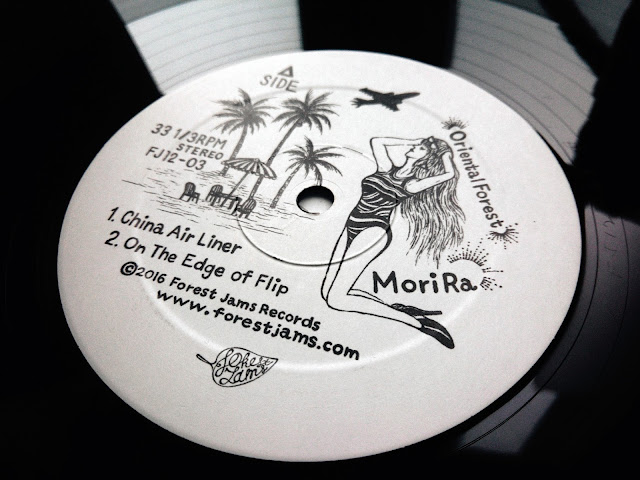 Recently Guy & Kris asked for support to keep the Sleazy blog running and to bring fresh mojo to the sleazyverse. When Luvless told me about their cry for help I immediately wrote Guy and offered my help.

Some of you might know me from
my productions as Martin Hayes for Razor-n-Tape, Rose Records and recently In Any Case Records.

I’ve been reading the blog since the early "gallery of awesome people“ days, to which I actually contributed a picture (mugshot obscured by skimpy knickers, if you have a copy of Frank Booker's record on Sleazy Beats, try and spot me on the cover!). Now let's get crackin' with my first review.

Possibly you’ve never heard of Mori Ra before, but that should change before long. The Osaka-based dj, record collector and producer managed to fly under the radar for a good while, but after a string of fantastic records on Macadam Mambo, Passport To Paradise, Most Excellent Unlimited and a recent sureshot edit of Yoruba Singers’ Black Pepper (on Left Ear), he's rapidly establishing himself as a name you can trust when it comes to unearthing and re-imagining obscure gems into dancefloor shaking steez.

I'd like to put the spotlight on his "Oriental Forest“ record on Forest Jams. There was a fair bit of hype around its original release in May 2016 and it quickly sold out. To satisfy the needs of us djs and collectors the fine folks at Forest Jams (Samuel Holborn) decided to repress the 12“ vinyl (thanks!) which is now doing the rounds.

On the a-side we have my personal favorite, "China Air Liner", a pitched-down edit of a 1985 og tune by Masayoshi Takanaka. mori turned the guitar heavy 80s pop tune into a bit of a hit with repetive vocal chops, an arp baseline and lovely "traditonal" instrumentation, all slowed down in a way that brings 6th Borough Project to mind.

„On The Edge Of Flip“ is a pure 80s pop sensation. The lovely drumming, a synth workout and a seductive vocal will have arms raised and smiles beaming their way to the booth.

On the b-side there's "Oriental Gleaming Body“, an instrumental jam that digs deep into italian synth-disco-ish territory. Play this and your spaceship will hit warpmode before you know it. "Groovy“, the last track, is an edit of a track from 1979, one of those holy grail things for serious diggers. Mori Ra only brushed it up slightly, with obvious respect for the original.

A fantastic record with well-selected and expertly edited tracks and lovely artwork done up by the man himself. As war rations seem to apply for the repress, do yourself a favour and be quick before they're all gone again.

In stock at Rush Hour for now, have a gander!