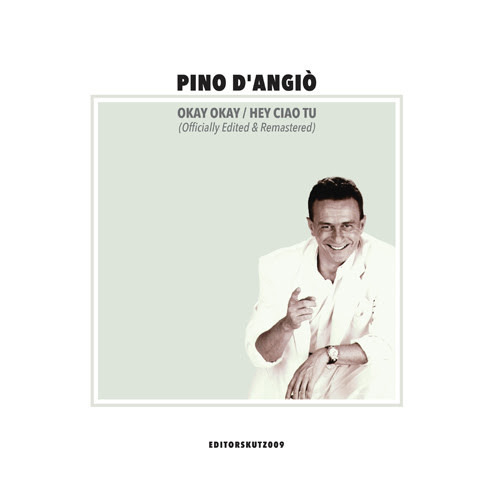 Hey all, Dries here, straight out of beautiful Brussels, Belgium. Happy and honoured to be a part of the Sleazy Beats family, and excited to be one of your guides on this never-ending tour through Choon-town. Next stop: Italia.

Pretty much my entire extended family and group of friends spontaneously starts getting lyrical when they talk about all the beauties and joys they've encountered on one of their many trips to the land of Cicero.
I, myself, am not one of those Italophiles I'm affraid. Italian fashion is overrated, spaghetti bolognese tastes average at best, and - being a bronzed stud myself - I frankly don't get the fuss about Italian men neither.

But I f*ing LOVE italo-disco.

So when Editor's Kutz announced they'd be releasing a remastered original and a couple of remixes of Pino D'Angio, I spontaneously started baking pizza for the entire village.

On the A1 we find Pino's original 'Okay Okay', an absolute classic when it comes to Italian disco music. The bassline and guitar licks combined with D'Angio's catchy lyrics still stand firmly, even 25 years after it's original release. And those bells..

The A2 sees 'Okay Okay' getting the Sleazy McQueen & Vinyladdicted nu-disco treatment. No major overhauls here, just some clever looping and the addition of a beefier kick, perfectly adapting the track to the modern dancefloors without losing any of it's original charm.

Did anyone say boat party?

The flipside kicks off with Lillo Carillo & Deaf Kick providing another edit of the same track, speeding it up a notch, putting more emphasis on the vocal and adding an overall more housy vibe.
Editor's Kutz have clearly saved the best for last, though, wrapping things up with a fingerlickin' re-edit of that other Pino classic 'Hey Ciao Tu'. Here, The Reflex puts his spin on Guy Minisky's edit, turning the original into a delightfully funky piece of music oozing with saxophones, guaranteed to trigger some serious stinkfaces on the floor.

Grab your copy over at Juno or any of the other usual suspects.
Editor's Kutz Italo Pino D'Angio Sleazy McQueen