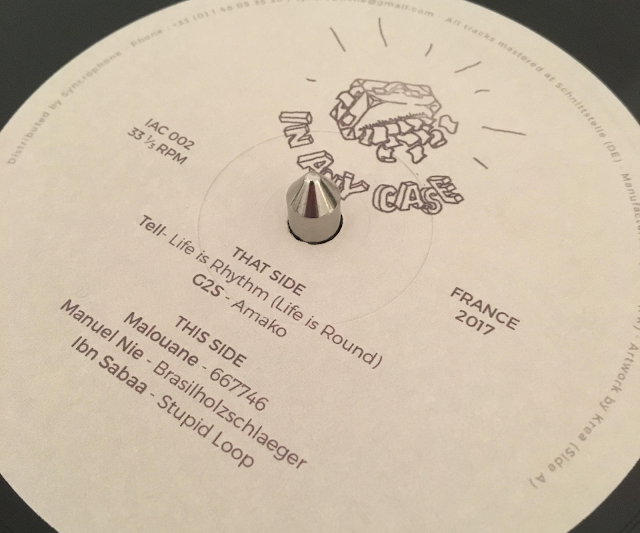 In Any Case are exactly what I look for in a record label. Great music spanning a mix of genres, a commitment to showcasing less-heard artists and a not-too-regular release schedule. I was actually a little late to the party on their 001, in fact it wasn't till I was talking with Martin Hayes and the rest of the Sleazy Beats crew that I got round to catching the release on Soundcloud and I ran straight down to Phonica to grab myself a copy. A wise choice, it must be said.

With their second, equally impressive release dropping last week, we wanted to shine a bit of a spotlight on this new label so I had a chat with head honchos Théo (G2S) and Clément (Malouane) to get the low down on their project. When these guys speak about their label, the tracks they're putting out and the artists they are choosing for their V.A's, you can tell right away that the love for the music is really there - this definitely comes across in the IAC releases. "Clément and I met in Paris a little more than a year ago", Théo said when I asked about how the label got started. "We went to the same party, thrown by La Chinerie. Glenn Astro was playing and it was awesome! We got to talking further about the frustration of being rejected by some labels and not being able to finally get one of our tracks on wax. We were thinking that a new label bringing many styles on the same record could be a great idea, inspired by Box Aus Holz for example. For us there was something missing in France regarding this kind of stuff, and we would be able to put out some of our most personal productions, focusing on our mutual inspirations that are Jazz, Funk, Disco, Hip Hop and all the sampled stuff we love."

This gap in the French house/disco market is certainly starting to be filled, with a host of artists and new labels releasing some stunning records in the last year. "I think that this movement came from a new will to offer some independent and home-made stuff that's born with some kind of revival in the club culture, commented Théo. "Folamour, Ethyène and Kaffe Crème are all from Lyon, as am I, and I've seen the club scene really grow and mature over the years." As someone who is loving everything being put out by these guys, it was good to hear that Clément wholeheartedly agrees, and he thinks there's much more to come. "Théo is right, we got the chance to have some amazing support with the guys mentioned, so in my opinion we now have to think about how we can keep it fresh, creative and interesting."

Another fellow French-man helping to move the scene forward is Tell, from Paris, who does the honours on the A1 here. I personally first heard of Tell's music via the Quartet Series and his wonderful track 'Hope Springs Eternal' on QS003. With this opener, 'Life is Rhythm (Life Is Round)', he gives us a little taster of his dusty house style with 5 minutes of Rhodes-filled groove. The first couple of minutes warm us up nicely, before he drops a MPC'd break that really gives us something to nod our head to.

It's the turn of the label heads next, with G2S closing off the A-side with 'Amako' before Malouane takes the reigns on the flip with '667746'. The former is a masterclass of sample-led deep house which starts us off with the repetitive vocal that inspired the track name, along with a twinkling of keys. By the time the  bass line kicks in, you're ready to dance and the choppy disco guitar lick makes damn sure you're shuffling those feet. With '667746', Malouane slows things down a little to ease us into the B. This is a lovely little track that whirls you around with some nice Rhodes chords and a couple of subtle hip hop samples. The low-end gives us just the right amount of movement throughout and you can imagine this one fitting in perfectly mid-set to make a smooth transition from the slower stuff to the hard-hitters.

Théo and Clement having their musical input has been a feature of both releases, and the guys think that this has played an important role in getting the label off the ground. "When we built the project, we already know one thing; we wanted to be a part of our first releases", explained Théo, "and it turned out to be a great idea because we dropped our respective tracks first and send the demos to some producers we love and also to some of our friends, and they got on board right away".

All of the In Any Case releases will be V.A's, with the overall vibe of the record at the forefront of their choices of artists. Martin Hayes, for example, was actually meant to feature on the 002, but when he sent 'Another Lonely Man' over, Theó and Clément thought it would be much more suited to the debut release. On this, Clément said "it is quite interesting to work with different artists, trying to keep it coherent even if they don't do the same kind of stuff. When we started to think about the label, I remember I was listening to some records for a gig and I told myself that it would be so cool to have some music on the same piece of vinyl that could work at peak time or when you're recovering from a huge hangover at home." Interestingly, Théo mentions that "this is where we (mostly Clément!) found the name - In Any Case - you can pull out that record and spin it whether you're looking to make the dance floor go wild or if you want to jazz things up at home."

I've certainly been jazzing things up at home with the B2 - Brasilholzschlaeger by Germany's Manuel Nie - which I think I've listened to every single day since the previews went up. The Rhodes heavy samples come out to play once again and the hip hop influences are there for all to hear. It's just the kind of release you'd expect on the aforementioned Box Aus Holz, a testament to how closely this release reflects the vision Théo and Clément have for the label.

Rounding off the record nicely, we have 'Stupid Loop' by Ibn Sabaa which mixes things up as a short hip-hop instrumental that'll remind you a little bit of Cuthead. It seems that this one was always going to be on 002, as Théo tells me "Ibn Sabaa is a friend of mine that also lives in Lyon, a texture wizard and a unique producer that has his very own sound. I loved Stupid Loop the very first time I heard it and I just can't get enough of it". That makes two of us, Théo!

All in all this is a cracking release, which does nothing but make me look forward to seeing what else these guys can come up with. 2017 should see IAC003 and IAC004, followed by a double V/A for IAC005. From what they've told me about who they've got in mind to feature, we've got plenty to get  excited about the future of In Any Case.

Big thanks to Théo and Clément for taking the time out of their weekend to speak to me and also a mention for Johanna who keeps the wheels spinning in the In Any Case HQ, but is enjoying herself on holiday right now. Krea - a Lyon based graffiti artist - also gets a shout out for the amazing job he's done with his anti-style designs on the A-side artworks.

Pick 002 up at Juno, Phonica and all the other usuals. There's also a few copies of the 001 repress left at Decks, if you missed out on that one.