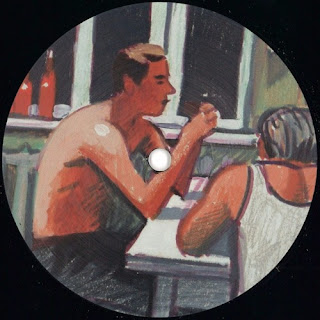 Monday morning, 7am. The alarmclock goes off and I jump out of bed in a hurry. No time for a shower, chewinggum beats brushing your teeth any day. Shirt. Pants. Really pushing my luck here so I'm going commando.
Time to move or I'll be late. Again.

Now to be clear, I love my job, but it's not something I would necessarily get out of bed in a hurry for.
No, this is a different ballgame.
This is release day.

Having only been in the game since the beginning of last year, Waxtefacts have quickly become an eminent part of the scene. Characterized by exquisite sample-based tunes on both sides, pretty much all of their releases sold out in no time and are fetching near-crazy prices on discogs.
No need to invest in the shark-feeding programme just yet though, represses have been confirmed for the end of the summer.

Taking care of this 5th release in the vinyl-only series, we have the artist formerly known as Real D.

Now Real J., after a brand name clash with an American company, the French producer's name might have slightly changed, but his vibe has remained the same. Sumptuous sampling, playful pianowork and drum-programming that goes straight to your feet is what this wax is all about.

Opener 'One Love' is the kind of track you'd expect to pop up while sipping a cocktail overlooking the ocean on a terrace somewhere around sundown. That stuff the DJ plays to let the people know things just got real. I went full-funkin' when the piano and guitar meet around the 2:45 mark.
Taking it from there, 'Let's Get Back' brings guitar licks reminiscent of smokey bars and fine scotch. A real moody groover, opening up more towards the second half. If you're hosting an after in your loft downtown, this is the good stuff.

If, like me, you are still hooked on last year's 'Rhodes That' , 'People Playin'' might put a familiar grin on some faces. By no means a copy of the former, the keys on this tune are about as effective as they come. Backed by some clever vocal samples, the whole package makes this my personal favourite of the lot.


As the needle moves closer to the middle, title track 'Stuck In The Realness' provides a worthy conclusion to the EP. Keeping in mind this is only his 3rd release, Monsieur Cabanne portrays himself as an artist to keep an eye on, showing off a percussive prowess a lot of other producers lack. From the first kick, this B2 grabs the listener by the gonads with a commanding low end. The vocal says it all, really. Everytime I'm in love.

For those looking to still snatch a copy, OYE, Clone and Phonica might have it in store.

Just don't forget to put your alarms for the next one.