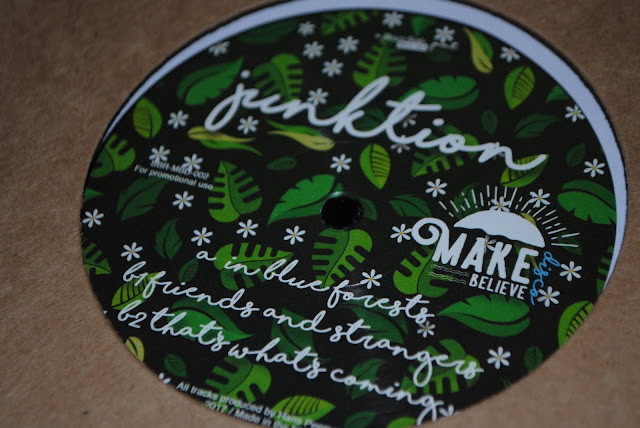 Just wanted to let you know that the second release on Sleazy Beats offshoot Make Believe Disco by our dear friend Junktion - or Hans to his nan - just came out. The Piccadilly crew penned down a really nice review, so instead of tooting our own horn, we'll let them do the talking:

"Sleazy Beats kick off another imperative collection of records following on from the sell-out Black Ops series. Dutchman Junktion inaugurates the set, serving up three functional and highly enjoyable jams that fit that nail that sleazy aesthetic down to a tee.

"In Blue Forests" is the showpiece here, a mystic and dynamic piece which journeys through mid-afternoon haze on a hot beach in search for the next dance party, a redolent synth motif occasionally breaking through the relaxed but direct rhythms. "That's What's Coming" is Balearic-boogie (new genre? surely not): sloppy, languid but with rigid drums and a solid foundation, allowing the synth flurries and keyboard motifs all the space they need to show off their finesse.

Finally, "Friend's & Strangers" draws on a proper post millennial melting pot of styles; a dash of strings, disco horns and some tropical condiments added to a concentric, house-friendly groove for that summery flavour that crosses genre boundaries with ease.

It was actually French Wunderkind Folamour who kicked off the series, but hey, details details, they both start with a b right? The Picc scribes WERE right about the record flying out though. It sold out from the distro on pre-sale, so here's a convenient list of shops that still have it in stock for you which we'll try to keep up to date in the next few days/weeks.