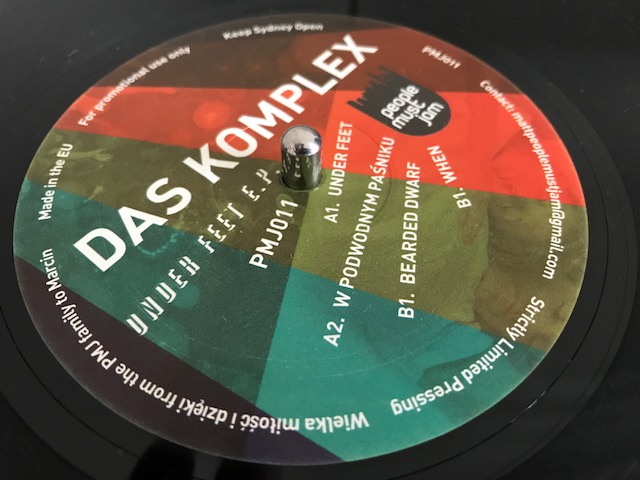 Forgive the delay on posting this one up! Meant to get this up yonks ago but life has gotten in the way. Where to start with People Must Jam? We've reviewed their 180g wares numerous times throughout the past few years, and can't seem to stop, as they simply put out some of the most consistent twelves in our collections that we love and cherish. Their razor sharp A&R'ing simply gives way to a string of hugely talented artists appearing on their releases, and this one is no exception - an 'Under Feet Ep' by Das Komplex. Marcin Lucaszewicz has been blowing up the spot since his debut ep 'Nowadays' on polish label Father and Son Records and Tapes in 2015 that caught our attention and really put his music in the spotlight for us and made us massive Das K fanboys.

So what have we got here then? His debut on PMJ follows a similar strong line in terms of his production style, he hasn't strayed too far from what he knows - which is definitely a good thing. The title track on the A is a funky dub disco cut with loads of delay and heavy analogue basslines that weave throughout. Flute stabs in the distance, eerie haunting breakdowns, and dubby electric guitar/synthlines (can't really tell which). Next up, a more organic and subdued 'W Podwodnym Pasniku' bounces along smoothly with that classic halcyon rave-days vocal about mind, body and soul...which easily makes it an insta-win in my book.

Flip over for 'Bearded Dwarf', that raises the bar a bit on the energy-o-meter. Dubby, disco-tinged loveliness morphed with a lead guitar line that will have you air-guitaring with the best of them. Finally, on to the B2 - our pick of the litter 'When' is a deephouse thumper with a spine-tingling slap bass-guitar line and cascading clap-delays. Sprinkle with female vocal snips for good measure, a bit of dry cowbell and woodblock action, and voila - a monster cut that we'll be reaching for for a good
bit.

All in all this is a product of what we've come to expect from one of our favourite labels in the game, and a producer who simply can do no wrong. A massively strong 4 tracker that you might want to search down and drop in your sets...that is, if you can find a copy. These seem to have sold out from most haunts already - but looks like a couple of spots still have it in stock like Ed Davies and Phonica Records. Be quick.