Malouane - Take Me Back to Clavius [Lagaffe Tales] 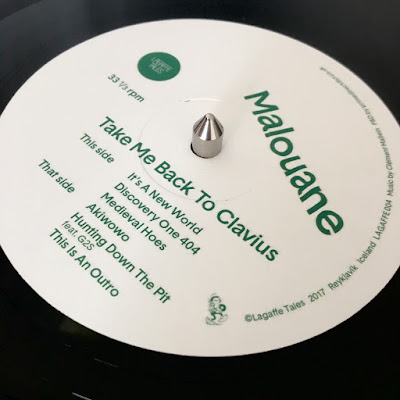 For their fourth release of the Lagaffe series, Lagaffe Tales have called upon In Any Case Records co-founder Malouane to grace the highly regarded imprint with his 6-tracker 'Take Me Back to Clavius'. For me, Lagaffe 001 was simply one of the finest records of 2016. It was some way to introduce the series and immediately set a very high standard, but somehow they've managed to continue to evolve with each release. Now, with 004, Frenchman Malouane brings to the table his own deep, emotive style of house.

After a playful intro, we're sent spinning straight into the A2, 'Discovery One 404', a downtempo groover with a laidback bassline and an infectious arpeggio. Malouane's tracks are usually pretty sample-heavy, but this one is 100% home made, showcasing his production skills and making it his favourite of the lot.

The A closes with the brilliantly named 'Medieval Hoes', bringing a bit more heat this time with some heavy kicks backed by a moody synth. Once the low end kicks in, we get hit with some real groove and the stuttering hi's ensure our heads are nodding throughout.

More accustomed to producing single tracks for V/A's, this is the first time that Malouane is getting to express himself across a full release. Given creative freedom from the Lagaffe boys, we get a full spectrum of his influences throughout the B.

B1 'Akiwowo' is my personal favourite of the EP - an African tinged number which our man Joseph did a damn fine job of summing up here.

For 'Hunting Down the Pit', fellow In Any Case founder G2S joins the party and the tempo is notched back up a step or two. Rolling bongos and some wonky percussion slowly evolve into an exquisite collection of keys samples and jazzy Miles Davis trumpet licks, which would work perfectly as a late night opener or mid-set transition track to get the dance floor shufflin'.

The record aptly closes with 'This is an Outro', in which Malouane get's the chance to flex his hip-hop muscles to bring the EP to a nice conclusion.

Not just your average set of club hitters, this EP is a medley of artistic expression from an artist who's clearly enjoying spreading his influence over his own chunk of wax. Make sure you pick it up from your favourite distro and whilst you're at it, cop yourself a free download over at the Lagaffe Soundcloud if you haven't already.