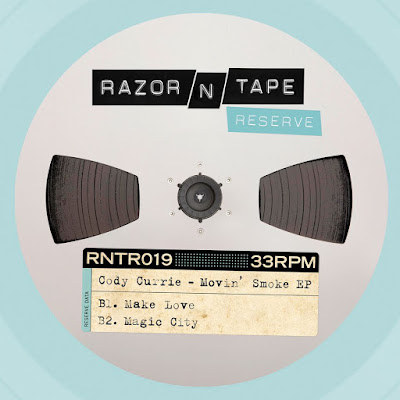 Cody Currie is everywhere you look at the minute, with releases throughout 2017 on a smorgasbord of top labels including Better Listen Records, that mysterious-but-not-so-mysterious A1 on House of Disco and a forthcoming joint on Secret Reels. As the old saying goes 'quality over quantity', but the fact is that Currie's productions are so consistently tight that he manages to offer both in abundance.

Here for you today we've got a little Peek at his upcoming 4 tracker 'Movin' Smoke' for our American friends Razor-N-Tape, which should be dropping in the next week or so. I've pulled out the B2 'Magic City' as my pick of the bunch, so hit play below and read on (if you can stop your head from moving).

As with all of Currie's productions, his musical influences shine brightly out of a Magic City, with a soundtrack-esque sample leading the way before we're met by some moody Rhodes. Before long his signature groove is dominating the low-end and, as we really get to the meat of the track, a soulful collection of vocals make sure this one's got our full attention.

The thing that always strikes me about this young producer's releases is his ability to evolve a track over just five or six minutes. His broad use of percussion, micro samples and his own synth work creates a sound that's full of flavour, with that unique-but-oh-so-familiar feel to it that everyone seems to love right now.