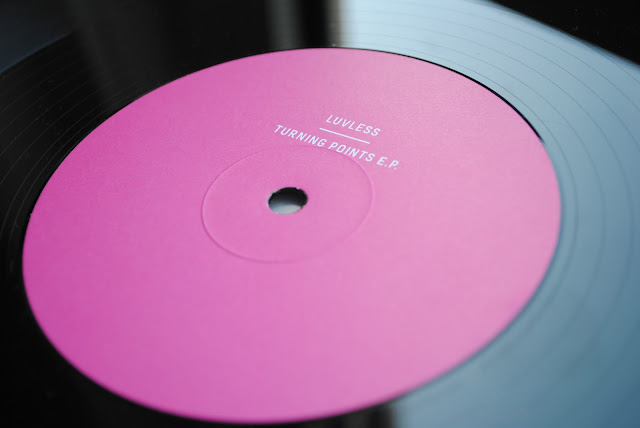 Oddly enough, mentioning Rose Records in DJ circles still gets me loads of raised eyebrows and puzzled faces, even though the Leipzig-based collective has been going at it for a while and their limited 12" releases change hands for crazy money on the used-record/vulture circuit. I think it's the limited and self-distributed nature of the releases that makes them fly under the radar for the masses. Which is a real shame, as if you've been following these guys you know how what a special bunch they are and how high they set their standards. Time to get in touch with a good distributor maybe lads, the world needs to hear what you have on display!

This delightful fifth release comes courtesy of Luvless, who's profile has been on the rise ever since his killer 'Motion Clapture' surfaced on Foto records, and rightfully so. He has worked out a magic formula that works a treat without getting formulaic. Take 'Away from here' for example, a lush midtempo groover with sharp claps and snares, rolling bass, a haunting vocal and crisp, uplifting piano lines. Or 'The Better Days', a slightly chunkier affair with choppy vocals and a badass groove. Or 'I found a love', the moodiest of the three original tracks on offer and my pick of the bunch, with Luvless conjuring up a simple but supereffective melody over rolling drums, soothing shakers and a heartfelt vocal. Have a listen below, it's really amazing fare:

Ali OOFT has been enlisted for remix duties, the first time I think someone other than M.Ono, Martin Hayes or Luvless gets to grace a slice of Rose Wax. Ali delivers a squelchy, acidic rendition of 'In My Arms', the orginal of which didn't make it to the record (there simply wasn't enough room left on either side of the release). You'll love this if you enjoyed the recent Secret Squirrel releases.

Eventually a few copies will wing their way to the bigger shops, but you might as well get one directly from the source by dropping the Rose crew a line over here: order@rose-records.com
Ali Herron Luvless M.Ono Martin Hayes Rose Records