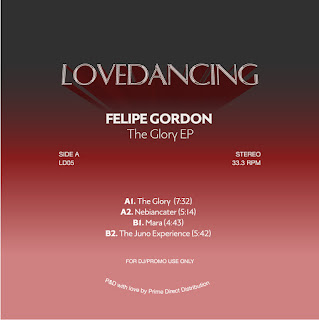 "Newspaper in hand, he was sat by the little brown table, his gaze aimed at the commuters on the other side of the railroad café window, rallying to catch a train on this bright but breezy April morning. The human condition, he mused, smiling slightly as he took a sip of his cup, an instant hit of welcoming warmth whirling up from the dark brew. "Colombian Black Gold" the logo on the stained porcelain read. Well, good morning!"

And a good morning it was indeed, when this slab of Colombian black gold landed in our mailbox.
Bringing his beats straight from Bogotá, Felipe Gordon has had his music released on the likes of Quintessentials, Toy Tonics and his own Nómada Records, his sample-based and swing-heavy approach being applauded by house enthousiasts from all corners of the globe.
Later this month, his 'The Glory' EP will be out on Whiskey Disco's sister imprint Lovedancing, marking the fifth chapter in the series.

And just like that good ol' cup of joe we started of with, our pick 'Nebiancater' makes you forget about your worries, even if only for a little while. Warm and welcoming pads with a spoonful of soothing vocals and a dash of piano, the perfect blend for sipping in style.


Pre-orders for 'The Glory' EP are now available from deejay.de right here.