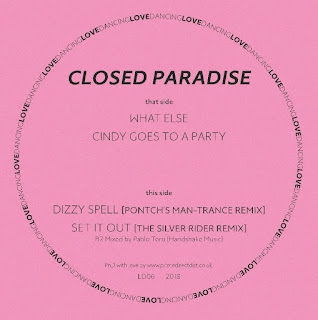 From that growling bassline on 'What Else', to the smoother-than-a-baby's-bottom 'Cindy Goes To A Party' and the Silver Rider's upbeat take on 'Set It Out', the 'Something Else' EP already has plenty to offer to even the most discerning of diggers.

Today, though, we're having all eyes on Pontchartrain's Man-Trance Remix of 'Dizzy Spell', a tune that came out earlier this year on digi and CD only.

Staying true to the original's slightly dark undertone while adding spellbinding melodic elements and a sparse, almost shamanic male vocal, Pontch manages to create a vibe arching more towards the mental state obtained from meditation or munching magic mushrooms than to DJ Tiësto's catalog from the early 00's. Definitely our type of trance.

If this Peek has put it's spell on you too, head on over to Juno to purchase the magic potion.